Clergy Doubt #10: He Tried his Damnedest to Believe and Now Wants Out

Clergy Doubt #10: He Tried his Damnedest to Believe and Now Wants Out March 9, 2015 Linda LaScola

Editor’s Note: This active minister and Clergy Project member shares his poignant story of sincere attempts to believe, mental anguish, his surrender to non-belief and his determination to get out of his predicament.

I think it was somewhere in my tenth year of being a minister that I started having doubts, but I was too scared to admit it, so I plunged myself deeper into ministry and became more adamant in my fundamentalist ways. I insisted that since the Bible was completely true, we must believe in miracles and supernatural spiritual gifts, and if we didn’t see those things occurring then there must be something lacking in our faith.

I prayed more fervently than ever but no one was ever listening on the other end. I longed to feel the presence of the Holy Spirit but I never did. I looked for some sign that there was a consciousness out there that cared for me deeply, but I have never seen it.

It probably doesn’t surprise anyone that I eventually became sick and depressed, at which point the realization that I no longer believed in Jesus hit me hard.

“This has been haunting you for a long time, hasn’t it?”

Like a child who was just a little too old to believe in Santa Claus, I had been clinging to my childhood convictions. I ultimately reached a point where I couldn’t believe what I told myself any more.

All this happened about fifteen years ago. It’s probably unfathomable to some that I went back to my faith at that point, choosing to believe even if I never saw any evidence of the things I said I believed in—isn’t that how Hebrews 11:1 defined faith?

I decided to act as if I believed, hoping that my actions would eventually help me find truth in religion.

It has been said many times that the definition of insanity is repeating the same thing constantly, expecting different results. Well, it has certainly made me crazy – and sick – and unhappy – and lonely.

I give up. Thirty-plus years of loyalty and service is enough.

I remember the realization came crashing in on me one Sunday in spring. I was sitting on the backporch, taking in the sun, trying to prepare myself to preach, when it hit me:

I just don’t believe this stuff.

It scared me to death. I would lose everything–my family, my friends my livelihood. All I knew how to do was be a minister. And my children… what would I tell my children? 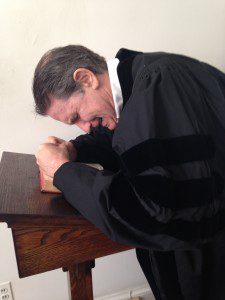 All this happened an hour before I was to stand up and preach sweet Jesus to the church.

I think my doubts became undeniable again last year once I had attained everything I set out to accomplish: education, full ordination in a liberal mainline denomination, job security and a retirement plan. Once I reached those goals, I found myself terribly unhappy and unable to stay with my choice to act as if I believed.

I got older, lonelier, and more tired, and have grown rather intolerant of bullshit. I have come to the place where I don’t want to waste my remaining years saying things I don’t believe and propping up the failing institution we call the church.

And one more thing: If there really is a God, I no longer want to serve him. If he is as awful as he is depicted in the Old Testament, then I will oppose him. In the New Testament, Jesus said God is loving, kind, and forgiving. He said that his Holy Spirit resides in us and guides us. I have loved that idea but I have never seen it or felt it and I’ve waited long enough. Time to move on.

4. How did the doubts affect your preaching/teaching/other responsibilities? Your interactions with your congregation and your family?

My church uses liturgical readings, and I rely on them as if they were a script, and I’m an actor reading a part.

I read in the book, Caught In the Pulpit, by Daniel Dennett and Linda LaScola, about how unbelieving preachers gave coded messages to anybody in the audience who were having similar doubts and perhaps were ready to move to a new place in their thinking. I used to do that but I do things a little differently these days.

I think of myself as a chaplain, trying to help people within the context of their beliefs, rather than trying to change them.  I might say,

“If you believe in Jesus, then you need to embrace his idea that addressing your brother or sister’s needs is the path to true religion.”

“If you are burdened with guilt, then take it to your Jesus to receive forgiveness.”

I’ve taught the Bible for years and I draw on my knowledge to teach about intent of the writer. Much of my preaching focuses on what the author was trying to say, which can make a pretty good sermon without having to lie too much. But I am a liar–which is why Sunday mornings begin with great anxiety complete with racing heart and pounding chest.

I simply quit struggling to believe. It became too hard to insist to myself that I believed in something that I really didn’t–couldn’t. I became too tired to believe.

6. How did you think of yourself at that time (e.g., agnostic, atheist, spiritual-but not-religious, non-believer, different-believer, something else?

At the moment I gave in, I simply went to the term atheist. But there are many degrees of nonbelief. There’s the atheist who adamantly refuses to consider the remote possibility of any kind of God or human spirituality. Intellectually, I can’t go there—it feels like the same extreme mentality of the believer who says he’s absolutely positive that God exists, and he knows exactly who and how God manifests himself/herself. I will still use the term atheist in referring to myself, but I reserve the right to change my mind.

I still entertain the possibility of spirituality, that there are aspects of persons, and perhaps animals, plants, and even “inanimate” things that might have a spiritual dimension. Most people have a “sense” or “awareness” that goes beyond physical science. I think of the ideas discussed in physics that entertain the thought that everything is connected, even overlapping and it sounds similar to spirituality. I want to think about more that.

Possibilities: I want to consider them. I want to wonder and ask questions and search for truth. I want to open doors to see what’s on the other side, not bolt them shut.

7. Anything else you would like to say that is not contained in these questions?

Is it weird that I still think of myself as a minister? I like caring for people. I want to see people get better and grow. I also believe that the world can change. Why not try for world peace? Why not work to make sure every person in the world has enough to eat? Why not try to rid the earth of grinding poverty? And human trafficking. These are complicated issue but so what? Let’s fix them anyway. I think the world can be a better place but religion is not the tool I want to use anymore.

Finally, I want to say that I feel like I must leave or I’m going to die. Every Sunday I wake up fighting to tamp the panic down, ignoring the pounding head and heart, and telling myself that I won’t really come apart. But I think I really might. I hope to make a graceful departure, but am not sure that will be possible.

Bio: “Stan Bennett” is a closet agnostic, still working as a minister for a mainline denomination. He has been a pastor for over thirty years, but is searching for other employment so he can escape from under the clergy robes.  He has a blog called A Preacherman’s Secrets and is publishing a book in April by the same name.

Photo Credit: Linda LaScola, 3/6/15.  The model is her husband, Art Siebens, wearing an academic robe and standing at a lectern that belonged to his grandfather, a Presbyterian minister.

March 12, 2015 Clergy Doubt # 11: This Ex-Nun Didn’t Doubt for Long
Recent Comments
74 Comments | Leave a Comment
Browse Our Archives
get the latest from
Rational Doubt
Sign up for our newsletter
POPULAR AT PATHEOS Nonreligious
1 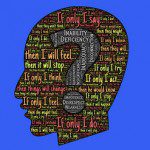 Nonreligious
Clergy Doubt #3: From Conservative to Liberal to...
Rational Doubt

What Churchless Believers Tell Us About Christians' Powers...
What we see now in Christianity's declining numbers is what a purely-optional,...
view all Nonreligious blogs
What Are Your Thoughts?leave a comment
Copyright 2008-2021, Patheos. All rights reserved.