Good Bye, Papa – Sorry I missed you in DC 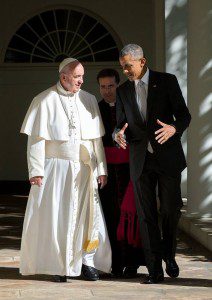 Pope Francis is gone from the USA. He delighted the crowds and confused the politicians. He raised hope for some and dashed it for others. He sounded more like a Democrat than a Republican, except on women’s issues. Even so, he was complimentary to the ladies (he needs us) and supportive to the Little Sisters of the Poor (who don’t support ObamaCare).

Just as Francis was flying out, I was flying in. I was in France the whole time – in Provence to be exact.

It was a long-planned vacation to a country house rented with friends. We also vacationed together in Italy in 2005, the beginning of what I sometimes call my “religious unawakening.”

Ten years later, I’m hosting a blog about non-believing clergy on the Patheos Atheist Channel and I’m sorry I missed the Pope. How can this be?

Truth is, I come out for just about any big public occasion in Washington, including every inauguration, no matter who wins. Luckily, the day of the Pope’s visit to the US Capitol, I received a NY Times update on my iPhone that allowed me to watch it live. Also, like a lot of atheists, I’m partial to this pope (as popes go). I’m not worried that he’ll turn around the flight from the church and I like that he cares about planet and that he’s not an old stick-in-the-mud like his predecessor and so many parish priests I’ve dealt with over the years.

Having been conditioned to expect harshness and condescension from Catholic clerics, I admit I was charmed when, during his remarks on the West Front of the Capitol 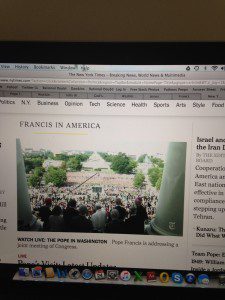 “If there are any of you that do not believe or cannot pray, I want you to send good wishes my way.”

Wishes are as ineffective as prayers, of course, but this seemed like the Pope’s way of saying:

“I know you atheists are out there and I don’t see you as the enemy.”

What a stark contrast to many other religious believers who think anyone who doesn’t share their beliefs is sinner in need of conversion or a foe who must be vanquished.

I also like the fact that Francis seems humble – so humble that he’s not living in the lavish Vatican Papal Apartments. 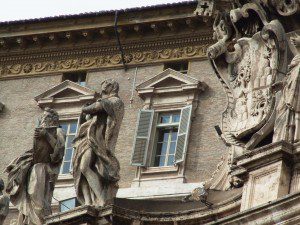 But it makes me wonder about something I haven’t seen addressed anywhere:

If the Pope isn’t living in his assigned palatial space, what is it being used for? Is it sitting empty?

And I have two follow-up questions for readers:

How about renting the Pope’s living quarters out to rich people and giving the proceeds to poor people?

What else could the empty papal apartments be used for?

**Update** I heard privately from two Catholic Patheos colleagues, Kathy Schiffer and Joanne McPortland. They provided some useful information about my questions, which I verified here and here.

It turns out that while the Pope’s private quarters have not been rented during Francis’ tenure, the Sistine Chapel has – in 2014 by Porsche, for a private meeting and a concert. It doesn’t seem to have become a trend, however. A Google search only shows this one instance.

Also,  while the Pope doesn’t live in his palace, he still uses it for official meetings. Thanks to Kathy and Joanne for the inside info on the Pope.

September 24, 2015
The Pope is coming and Gerald Posner has something to say about it
Next Post