Former Catholics put a Spotlight on the Movie “Spotlight”

Editor’s Note: Former Father Uhl is back with a short review of the movie “Spotlight” which is currently playing in movie theaters throughout the country. His written review will be followed by a podcast of a conversation among three formerly Catholic women – Catherine Dunphy, a Jesuit Seminary Graduate, Mary Johnson, former sister with Mother Teresa and me – former Catholic kid who slowly drifted away after confirmation.

Wow, what a movie! 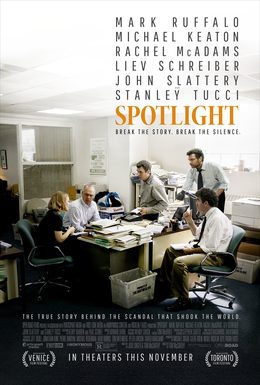 I don’t go to the theater much anymore; however, a friend recommended Spotlight, and I am thrilled that she did.

After sitting through the overly loud previews of coming attractions, I was gripped and held by the rapid-fire efforts of The Boston Globe‘s special investigative team called “Spotlight.” The members of this impressive team, under the direction of The Globe’s new editor, went where others were afraid to go as they heroically fought to bring the very powerful Archdiocese of Boston to account for the long-standing cover-up of priestly sex abuse of youngsters.

The acting did not seem like acting at all as I was drawn into the intrigues and challenges thrown up by the politically and financially powerful Cardinal Archbishop of Boston, Bernard Francis Law.

The widespread priestly pedophilia had been successfully swept under the rug for decades, and the archdiocesan forces were not about to let that rug be thrown back without a desperate fight; the sacred institution of the church must be protected at ALL costs. It was the institution that must be preserved and protected, even if this demanded threats and clever legal maneuvering. The matters of psychological destruction of the abused youngsters and justice were to be kept secondary–and as secret as possible.

Team Spotlight finally throws the spotlight onto Cardinal Law’s clever web in such devastating detail as to leave him without comment when the thorough and damning Globe report was finally published. The tearful, angry and desperate details of so many of the adult survivors among the 87 (or more) victims will sear themselves into your heart.

Doubtlessly, my having been a Catholic priest back in the 1960’s deepened my interest in the details of this powerful movie. Nevertheless, this movie will surely deeply touch anyone who is personally interested or knows people who are interested in the power of the Catholic Church. At the end of the movie, I wanted to jump up and shout to all in the theater,

“Tell all your friends and contacts about this gripping masterpiece.”

**Editor’s Question**If you saw the movie, what were your impressions of it?

Bio: Stephen Uhl, Ph.D., was predestined by his mother to become a priest. He became a Benedictine monk during the twelve years of seminary preparation, which led to priestly ordination. Uhl also earned a license to teach theology in pontifical universities. Ten years into the priesthood his doubts caused a divorce from the priesthood and the church. While teaching mathematics in public school, Uhl married another teacher. After earning a Ph.D. in Psychology, he enjoyed a thriving private psychology practice until retirement. He is a member of The Clergy Project and an active supporter of The Freedom of Religion who has appeared on their billboards.

December 10, 2015 Defense of Clergy Pedophilia Persists
Recent Comments
8 Comments | Leave a Comment
"I have always thought it should be “...foolishness to those who are NOT perishing...” Why ..."
Ralph-Uwe Scherer The New Testament’s Biggest Cover-up: Jesus ..."
"It's odd that you say Vujicic has had much suffering when you apparently don't know ..."
Dorothy G. Ferguson Is Suffering a Problem for Those ..."
"But Anne, can't we create a meaningful and comforting narrative based on truth rather than ..."
Gary Whittenberger Is Suffering a Problem for Those ..."
"True, but there exists no God to have that plan anyway."
Gary Whittenberger Is Suffering a Problem for Those ..."
Browse Our Archives
get the latest updates from
Rational Doubt
and the Patheos
Nonreligious
Channel
POPULAR AT PATHEOS Nonreligious
1