Living Between Belief and Unbelief

Editor’s Note: Elizabeth gamely takes on what it means to her to dwell somewhere between religious belief and nonbelief. It seems to me to be a hard, complicated place to be. Maybe not a “place” at all, but I think a lot of people are there, or at least spent some time there before moving one way or the other.

Linda’s July 4th post, “Celebrating Independence – Religious Leaders Freed from Belief” is so empathetic and inclusive it even includes an “in-between” – me. When I commented that a big help for me has been Thich Nhat Hanh, Linda, always exploring, suggested that I write about it!

I think I can live “in-between” partly because I haven’t suffered as many have. I’ve had estrangements because of my anti-literalistic views, but have not been shunned by my children, which would be excruciating, nor seen family members irrationally exposing themselves to mortal danger because of extremist beliefs. Reading this blog has made me aware of these tragedies, and keeps me wondering whether religious traditions really should disappear altogether, as many recommend.

I have felt some anger that the literalism I grew up in squandered so much of my time as I struggled to come out of it. But maybe I should honor that time as simply part of the steady march of human understanding that we’re all part of. Also, I keep thinking that humans will exclude, hurt, help, and celebrate one another both with and without religion, or science, or the arts.

But the most powerful influence toward accepting the unease of being in-between – a path of reform rather than elimination – is a brother I met along the way, Vietnamese Zen Master and peace activist Thich Nhat Hanh. 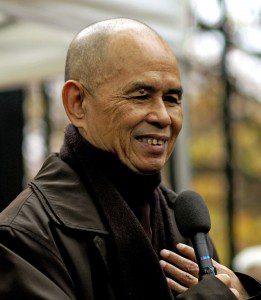 While reading his Going Home: Jesus and Buddha as Brothers, I took to heart his words about spiritual seekers from the West who come to him:

As a native of Vietnam, Thich is only too aware of the dark side of Christianity, and the myriad of “Jesuses” we’ve discussed here, from the divine to the diabolical. Movingly, Thay chooses to speak of the “good” Jesus, writing:

“We have blood ancestors but we also have spiritual ancestors. If you were born in the West there is a big chance you are a child of Jesus and that you have Jesus as your ancestor. Jesus is one of the many spiritual ancestors of Europeans. You may not consider yourself a Christian, but that does not prevent Jesus from being one of your spiritual ancestors because your great-grandfather might have been a good Christian. He has transmitted to you the seed, the energy, the love, and the insight of Jesus….

The Rational Doubt review of Crossan’s How to Read the Bible and Still Be a Christian has helped me learn how to defend that Jesus. Bart Ehrman’s fascinating new book, Jesus Before the Gospels helps me feel free to carefully construct my own “memories” of the traditions. Abelard’s “Revelation” approach can – and something must — replace the morally horrifying theory of substitutionary atonement. And religious and non-religious texts are intriguing to explore for insight, history of ideas and cautionary stories, using the measuring stick of compassion.

The problem of evil warns me against the anthropological fallacy Voltaire named: 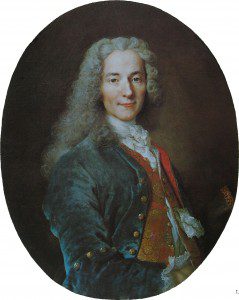 “If God has made us in God’s image, we have returned God the favor” – creating “God” in our own image.

At the same time, as I read Hawking about the swirl of energy we are part of, I don’t want to close off the possibilities of relating to the universe in an “I-Thou” rather than strictly “I-It” way. To hold that human consciousness is the most sensitive thing we relate to strikes me as a bit chauvinistic — hubristic! Maybe there is something like a force or dimension for good we can tap into. If not, as we act, we augment or create such a force.

I’m encouraged that the denomination I grew up in and still take part in is slowly becoming much more open. I am thankful for time to study and think. And recently I’ve been blown away by Clergy Project member Gretta Vosper’s statement to the United Church of Canada as she struggles to continue to pastor the humanistic congregation she has built within that denomination. Her words have the ring of a “95 Theses” moment. 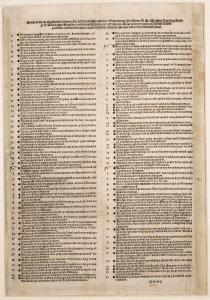 Amidst it all, the writers and commenters are a huge help to me, pressing questions, not letting facile phrases slip by, questioning everything. From In-Between Land, I thank you.

Bio: Elizabeth thinks of herself as a “pan-compassionist freethinker.” Recently she met her soul mate, 94 year-old African American, Betty Reid Soskin, who currently serves as a park ranger and describes herself as “an evolving person, in an evolving nation, in an evolving universe.” Elizabeth loves studying, walking, tai chi, singing, piano and family. Became politically active when the U.S. started legalizing torture. Seems to spend a lot of time defending people who are LGBTQ, Muslim, or of color. Retired from chaplaincy in long-term care and hospice. Trying to get her ducks in a row so her kids won’t have to when she becomes violets. Happy to have discovered everybody here. 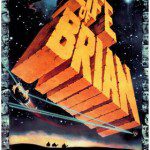 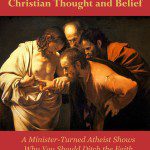