Editor’s Note: Getting sick of “alternative facts”? Here’s a book that deals in accurate information and how to convey it to people seeking it and/or needing it.

“They want to know: do we worship the devil? Do we believe in anything at all? Do we eat babies? The answers: no, yes, sometimes, respectively.” –David G. McAfee

The author of Disproving Christianity and Mom, Dad, I’m an Atheist has done it again with another bite-sized tome entitled Atheist Answers: Rational Responses to Religious Questions. 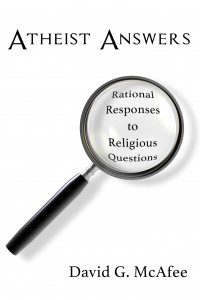 This book is a helpful resource for those needing quick answers to basic questions about atheism.

David G. McAfee is the epitome of Atheism 101 or educational atheism. He writes about introductory topics that can be read in an afternoon. His writing is always instructive, not to be confused with the other David McAfee who writes fantasy about Jesus and vampires. This coincidence has led to some hilarious confusion when I first started looking for all titles under that name.

McAfee’s tools of choice include a rational approach and everyday language that communicates clearly. In Atheist Answers we see the same dialectical purity in which McAfee readers would be familiar. I personally have a great deal of respect for McAfee, his writing and his evidence-based positions. While often to-the-point, he does not come off as robotic. I noticed him preface his answers to distraught people with “I’m sorry,” and when one questioner with cancer asks how they can handle an overly religious oncologist, he begins,

“You’re in a very sensitive position and I would never pretend to be able to understand it entirely.”

Here McAfee shows both empathy and an acknowledgment that what he offers is not the entirety of atheist knowledge and experience.

His responses often reminded me of similar ones from Atheos, an app to help nonbelievers respond to believers with epistemology. Sure enough, upon looking up the list of contributors for that app, there he was.

If you don’t like to read an entire book in italics, this book is not for you. I’ll admit to reading the word “belp” several times before realizing that it was “help” with the italicized “h” curling under itself. My nine year old looked over my shoulder and asked in amazement, “They make books in cursive?”  No, not cursive, but close enough without my glasses. I’ve decided to forgive him for it since the subject matter more than makes up for the format. For some, I’d imagine, italics will make the book feel more intimate.

If many of the questions and answers from Atheist Answers sound familiar, they are. The book draws heavily from McAfee’s online interactions—with the spelling, grammar, and fluidity of the questions obviously improved upon for the book, at least from what I remember of the originals. His willingness to continuously engage with reams of queries from curious believers who frequent his pages is an admirable endurance. McAfee’s Facebook author page has over 170,000 likes and averages thousands of comments per post. If I had to sum up McAfee in one word, it would be “patient.” He tends to see a lot of repetition in the questions posed to him:

Why don’t you believe in God? Why do you hate God? What if there is a God and you’re wrong?

If the answers he gives sometimes feel like the same message reworded, I think that reinforces the point that atheism is just a lack a belief in god(s). It really is that simple.

As a formerly religious person, one of the things I love about McAfee is that he does not shy away from looking into religion. He seems intrigued by different belief systems, which naturally led to his academic work in religion studies. He argues that

“Religions are important because people continue to base their lives on religious scriptures and dogmas.”

Like a bright-eyed Steve Irwin holding up a venomous creature and remarking upon the fascinating aspects of it, I sometimes imagine McAfee holding up a religious doctrine that others would find repulsive or dangerous and saying,

“Would you look at that four thousand-year-old belief! Isn’t it a beaut! This has inspired millions of people to do a certain behavior! Crikey!”

While recognizing the harm religion has done, McAfee thinks religious ideas need to be reformed for a better society, not necessarily eliminated, which is the traditional anti-theist position. Although I go back and forth on this issue, I tend to disagree with McAfee’s optimism about religion being a social good. In imagining a world without religion, McAfee states his belief that

“There would likely be fewer suicide bombings, but also fewer charities.”

I think that having fewer charities is a fair statement. Similarly, if we eliminated the idea of Santa Claus there would likely be fewer gifts given in December. But do the ends justify the means? In other words, in order to praise the good done by hospitals and charities, we must first overlook the countless people silenced, terrorized, tortured, and killed throughout history by those religions until they dominated systems of power and expanded to the point of prosperity enough to invest in those institutions. Does that diminish the good done today? I’m not sure, but if I had a TARDIS, 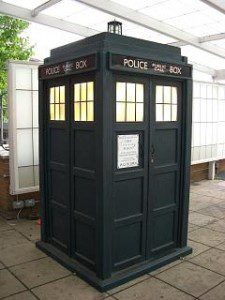 I would prevent it if I could.

A discussion on the social good of religion is a complicated issue, and I realize I’m converting a simple statement taken from a pithy reply into a full-blown debate. Atheist Answers never promises in-depth answers, or a treatise on the entirety of the author’s opinions, but instead offers starting-off points for investigation. In that way, this book has been successfully engaging. I’m ready for McAfee to write a new book for every answer he gives here. In the next several decades, he just might.

I would recommend Atheist Answers to those just discovering they are no longer religious and wondering what rational responses to give to the questions they are encountering. I would also recommend it to religious folks who are looking to understand their atheist friends and neighbors. Apparently, there are thousands of them online, asking questions.

Bio: Alexis Record is a feminist, humanist, special needs adoptive mom and former Bible student and teacher. She devoted the first 30 years of her life to living and teaching the Bible both in the US and abroad. Nowadays she is volunteering at Sunday Assembly San Diego, pouring her heart out on The Clergy Project forums, advocating against Accelerated Christian Education, spreading awareness for her children’s condition of arthrogryposis and contributing to The Radical Notion where she is a senior writer. 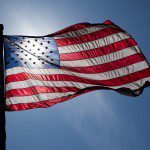 February 2, 2017 Drew Bekius Speaks: New Clergy Project President
Recent Comments
7 Comments | Leave a Comment
"I have always thought it should be “...foolishness to those who are NOT perishing...” Why ..."
Ralph-Uwe Scherer The New Testament’s Biggest Cover-up: Jesus ..."
"It's odd that you say Vujicic has had much suffering when you apparently don't know ..."
Dorothy G. Ferguson Is Suffering a Problem for Those ..."
"But Anne, can't we create a meaningful and comforting narrative based on truth rather than ..."
Gary Whittenberger Is Suffering a Problem for Those ..."
"True, but there exists no God to have that plan anyway."
Gary Whittenberger Is Suffering a Problem for Those ..."
Browse Our Archives
get the latest updates from
Rational Doubt
and the Patheos
Nonreligious
Channel
POPULAR AT PATHEOS Nonreligious
1