Homosexuality in the Bible (and the Christian Church)

Editor’s Note: The rest of May will be “Bart Ehrman” month. Every blog post will come from Ehrman’s own blog — with permission, of course.  Bart is one of the earliest members of the Clergy Project – and possibly the most prolific and well known of TCP’s many writers.  He writes numerous posts per month – I really don’t know how he does it, while teaching courses and writing books at the same time. Most of his posts are private, for paying members only.  But there are a few “public” posts every month that he’s allowed me to repost here. He wants his knowledge to spread, and he’d also like more people to know about his work and to subscribe to the private posts.  Everything he earns from the blog goes to charity.  As he says on his home page: “Bart has started this site as way of raising money to combat hunger and homelessness. ALL proceeds from the site go to charity! (Bart doesn’t keep one thin dime.)” I don’t keep one thin dime of what the Rational Doubt blog makes either.  It all goes straight to my favorite worthy cause – The Clergy Project /Linda LaScola, Editor

Here is a pressing question I was asked about a month ago, involving homosexuality and the Christian church.  Since the question was asked, as you know (if you follow the news!), the Methodist Church has made its decision.

I decided to ask a real expert to deal with the question, my friend Jeff Siker, PhD in New Testament who has just retired from a 30+ year career teaching biblical studies at Loyola Marymount, and who has edited two books that address Christian views of homosexuality, the one he mentions below in his answer (1994) and a more recent reference work, Encyclopedia of Homosexuality and Religion (2006). When it comes to this topic, he’s heard it all and is massively informed.  These two posts, of course, represent simply a condensation of the relevant information and his views about them.

Jeff has served as a guest poster twice on the blog before, and both times graciously answered questions and responded to comments.  I’m not sure if he will be able to do so (I asked him just now, but he is in a different time zone). If he can, great.  If not, I’ll deal with questions, comments myself. [See original blog post.]

From February 23-26, 2019 in St. Louis, the United Methodist Church will have a special conference session to discuss the issue of homosexuality. As a former UM and with relatives in the UM church, the result of this conference could result in the split of the UM church.
In Romans 1:26-27, conservative will argue that these verses condemn homosexuality. Liberals will argue Paul is only condemning behavior by Roman male citizens abusing slaves and young boys who had no rights because they were not Roman citizens. Paul is not condemning consensual homosexual relationships.

I support the right of gays and lesbians to marry but wonder if liberals are allowing their own bias to influence their reading of Romans 1:26-27.  NRSV Romans 1:27 reads: and in the same way also the men, giving up natural intercourse with women, were consumed with passion for one another. Men committed shameless acts with men and received in their own persons the due penalty for their error.  The phrase “consumed with passion for one another” does not imply abusive relationships to me, but consensual attraction.  What do you think of Romans 1:26-27?

Twenty-five years ago I published a book on Homosexuality in the Church: Both Sides of the Debate (Louisville: Westminster/John Knox Press, 1994).  Since then many things have changed both in the church and in society regarding the status of LGBT individuals.  Some churches have split after years of unresolved debate over whether homosexual expression is by definition sinful or not (the Presbyterian Church, the Episcopal Church).  In the United States the most important change has been the Supreme Court decision legalizing gay marriage.  This has been accompanied by a general cultural acceptance of LGBT individuals within society at large.

But just as LGBT individuals have found far greater acceptance over the last generation, so have some churches reaffirmed their traditional ban on same-sex relationships.  This past Tuesday, February 26, the United Methodist Church held its General Conference in St. Louis, with representation from around the world.  The church voted to affirm “The Traditional Plan” as the way forward to address the deeply divided denomination in regard to the status of LGBT clergy and marriage.  Since 1972 the United Methodist Church’s Book of Discipline has made it clear that “self-avowed practicing homosexuals” are not to be tolerated within the church.  But over the last couple of decades the church has been lax in enforcing its ban on same sex relations, in large part because of more inclusive attitudes within US society.  Many clergypersons have “come out” to their congregations as LGBT individuals in committed relationships, and many clergy have openly performed same-sex marriages as blessed by God.

In response to the growing acceptance and normalization of LGBT relationships both in society and in the church, the United Methodist Church decided to take a firm stand.  Either they would reaffirm “The Traditional Plan” that endorsed the historic prohibition of same-sex relations and more strictly forbid the inclusion of openly LGBT individuals within the church, or they would adopt the “One Church Plan” that would allow flexibility for local churches and larger clusters of United Methodist churches (Annual Conferences) to recognize same sex marriage and openly LGBT clergy as legitimate expressions of Christian faith.  The church voted for “The Traditional Plan” in a firm rejection of same-sex relations.  In taking this stance the United Methodist Church has joined the Roman Catholic Church in rejecting homosexuality as a valid way to live a Christian life.  The United Methodist Church’s vote encourages more progressive members and congregations to leave the denomination if they are unwilling to endorse the traditional view that goes back officially to 1972.

One of the primary rationales for the traditional view, of course, has to do with perceptions of what the Bible says about same-sex relations.  This involves no small debate about how to read, interpret, and apply the Bible to modern times.  A brief overview of the six biblical texts typically cited and debated as relevant to the discussion is appropriate here.

“…The men of the city, the men of Sodom, both young and old, all the people to the last man, surrounded the house; and they called to Lot, “Where are the men who came to you tonight? Bring them out to us, so that we may know them.” Lot went out of the door to the men, shut the door after him, and said, “I beg you, my brothers, do not act so wickedly. Look, I have two daughters who have not known a man; let me bring them out to you, and do to them as you please; only do nothing to these men, for they have come under the shelter of my roof.”

The story of God’s destruction of Sodom and Gomorrah has often been used to argue against same-sex relations.  After all, the argument goes, the wickedness of the men in the town is demonstrated by their desire to “know” (i.e., have sex with) the two visitors that Lot is hosting.  Little did they know that these visitors were angels sent by God.  Most interpreters recognize that the story is about sexual violence (rape).  Still, this biblical passage is often cited as an indication that scripture links same-sex acts with sin, especially since the term “sodomy” came to be used as a generic term for anal intercourse.

This passage occurs in the larger context of the Holiness Code (Leviticus 17-25), which spells out how the Israelites should behave as they take possession of the land of Canaan.  Overall the code warns against adopting any of the idolatrous practices of the Canaanites.  This passage is a simple prohibition of same-sex relations between males.  There is neither a rationale nor a punishment specified.

This passage also occurs within the Holiness Code.  It repeats the prohibition of same-sex relations between men, but also specifies the severe punishment of death.  In both Leviticus 18 and 20 we find significant references to the idolatrous worship of the Canaanite god Molech (18:21; 20:2-6), which suggests that same-sex acts may be connected to such false worship.

May 2, 2019
When the Roof Forest Burns (a photographic essay)
Next Post 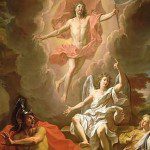 May 9, 2019 Did Paul Believe that the Fleshly Body Would be Resurrected
Recent Comments
19 Comments | Leave a Comment
Browse Our Archives
Follow Us!