The United States Has an Evangelical Problem

The United States Has an Evangelical Problem January 23, 2020 Linda LaScola

Editor’s Note: OK, so readers here are already well versed in this issue. Still, it’s good to be reminded of the history of Evangelical political influence in the US, and to resist making assumptions about positive or negative outcomes. Also, don’t give up, as I and the author of this piece have sometimes been tempted to do.  /Linda LaScola, Editor 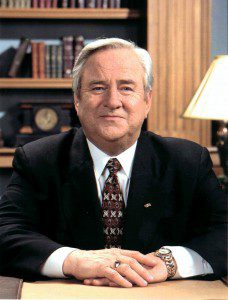 Jerry Falwell, a graduate of Baptist Bible College in Springfield, Missouri, started Thomas Road Baptist — an Independent Fundamentalist Baptist (IFB) institution — in 1956. The church quickly became one of the largest churches in the United States. Today, the church claims it has almost 25,000 members. In 1971, Falwell founded Lynchburg Baptist College, now known as Liberty University. Liberty, an accredited university, is the largest Evangelical college in the United States. Most Evangelicals of my age likely remember Falwell’s weekly television program, The Old Time Gospel Hour. It was through his educational and media empire that Falwell pushed the Moral Majority’s agenda: to take back America for God.

In 1979, my wife and I attended a Moral Majority-sponsored outdoor “I Love America” rally at the Ohio State House. We later went to a pep rally of sorts held at a downtown Columbus location. All Polly remembers is discreetly breastfeeding our infant son during the rally. I, however, remember the thrilling speeches about returning the United States to its Christian roots. Dripping with manifest destiny and American exceptionalism, these speeches stirred my heart, and for many years, I devoted myself to waging what become known as the “culture war.”

In 1989, after successfully helping elect Hollywood actor Ronald Reagan to two terms as president, the Moral Majority disbanded. Falwell said at the time,

“Our goal has been achieved…. The religious right is solidly in place and … religious conservatives in America are now in for the duration.”

Today, Evangelicals, having sold their souls for bowls of pottage, rabidly support Donald Trump, the most unqualified man to ever be president. Eighty-one percent of voting white Evangelicals voted for Donald Trump. If the presidential election were held today, Evangelicals would, yet again, overwhelmingly vote for Trump. Even if Trump was thrown out of office, Evangelicals are satisfied that Christian America will be safe in the “godly” hands of Evangelical and True Believer® Mike Pence.

It is clear to anyone who is paying attention that Evangelicals have taken over not only the federal government but also many state governments. Here in Ohio, Evangelicals (and conservative Catholics) rule the political roost. Now having a super-majority, Evangelicals — who are overwhelmingly Republicans — are able to enact their agenda at will, with only the courts standing in the way of them turning Ohio into a theocratic state. And now that Trump is packing the federal courts with conservative Christian jurists, the only recourse we have to beat back Evangelical sharia law may soon be gone.

Secularists love to point to studies showing that Evangelicalism is in numerical decline. While this is certainly true, that doesn’t mean the political power amassed by Evangelicals is in decline. It’s not, and as things now stand, it could take decades to undo all the damage done to our Republic by primarily white Evangelicals and their Mormon and Catholic cohorts.

I live in rural northwest Ohio. Donald Trump and the Republican Party dominate local and state politics. Local Democratic groups are largely ineffective or lifeless. And even among these groups, you will find that the conservative political beliefs espoused decades ago by Jerry Falwell and the Moral Majority have deeply influenced their thinking. I can tell you this much: true liberals around here are almost as rare as ivory-billed woodpeckers. Fearing social or economic retribution, what few liberals there are maintain a low profile. Of late, local Democratic operatives have taken to writing letters to the Defiance Crescent-News. While I appreciate their efforts — having been a regular writer of letters to local newspaper editors for almost 40 years — I fear that they operate under the delusion that their letters will change the minds of local Trump supporters. They won’t. At best, their letters to the newspaper remind other Democrats/progressives/liberals that they are not alone. Changing hearts and minds? Not a chance.

Due to the local sports photography work I do, I am connected with numerous locals on social media. Many of them are like me, using social media to share photos and cat videos. Others, however, regularly post things in support of Donald Trump. One woman, a relative of mine, went off on a rant over Trump’s impeachment, calling Nancy Pelosi and Hillary Clinton all sorts of vile names. People such as I are routinely pilloried. I say nothing, having learned that talking politics on social media is a waste of time. Oh, it feels good to rip a right-winger a new one now and again, but to what end? Instead, I quietly unfriend such people. And it’s not just locals either. I am “friends” with several family members who routinely post all sorts of right-wing nonsense. No lie is too absurd to post, and no action by President Trump is so vile, extreme, or un-Christian that they won’t find a way to defend him.

Trump knows that the key to maintaining political power is convincing Evangelicals that he is a defender of Christian orthodoxy and a warrior in the battle against libtards, atheists, and socialists. So far, Evangelicals think that Trump is some sort of manifestation of God’s plan for Christian America. In the end, the joke will be on them, but by then the United States will lie in ruin.

The only way to beat back the Evangelical horde is for people of good will and reason to understand that Evangelical power and control is an illusion. As things stand today, atheists, agnostics, and nones are as large a demographic as Evangelicals. Hillary Clinton, a polarizing and weak presidential candidate if there ever was one, defeated Donald Trump by three million votes. Unfortunately, it is the arcane, outdated Electoral College that decides presidential elections, and not the popular vote. To keep Trump from being re-elected in 2020, millions and millions of new voters must be mobilized, and countless lazy Americans must be dragged from their beds to vote on Election Day. So far, nothing I have heard from the 3,023 people running for the Democratic nomination says to me that Democrats truly understand how to unseat Trump and take back congress. Maybe someone will rise to the top of the pile and mount an effective defense of American republicanism and secularism, but as of today, I have my doubts. If Democrats don’t figure it out soon, we are looking at four more years of Trump. Imagine the depths of the damage that will be done by Trump and his henchmen if they are given another term in office.

Democrats wrongly assume that our democracy can withstand whatever Trump and Company might do. While I thought this very thing at one time, I no longer believe it to be true. The United States is teetering on the edge of ruin and collapse. And this, remember, is exactly what Evangelicals want. Progressivism, secularism, pluralism, and socialism must be destroyed in order for the Evangelical Jesus to be enthroned as the king and ruler of the United States. Don’t believe it for one moment when Evangelicals “say” they don’t have theocratic ambitions. They do, as Evangelicals made clear in their racist attacks on Barack Obama, their unending attacks on LGBTQ people, their support of anti-immigrant, anti-poor policies, and their criminalization of abortion. Now that conservatives control the U.S. Supreme Court and Justice Ruth Bader Ginsburg is living on borrowed time, Evangelicals know the time is ripe to roll back the social progress of the last sixty years. Want to know what a Christian America might look like? Take a look at countries ruled by Sharia law. Look at what’s going on in India today. Once a proud secular state, India now faces the establishment of a theocratic state by Fundamentalist Hindus — India’s version of Evangelicals.

Part of me wants to say,

“Fuck it, I give up. I am going to die soon, and if death doesn’t get me, global climate change will.”

Quite frankly, I am worn out. But then, I think of my children and grandchildren. What will they say about me if I give up now?