When Miracles Don’t Measure Up

Editor’s Note: I believed in miracles when I was a kid, but I never saw one and never expected to. It seemed like they were only supposed to happen in Bible stories or to peasant children in other countries. This meant people like me were definitely not in the running. I do recall not being impressed with the Doubting Thomas story, mentioned below. It didn’t seem like asking too much to see the risen Christ’s wounds. I think we’d be a lot better off if more people demanded evidence for unlikely claims. /Linda LaScola, Editor

God can’t quite manage to SHOW up

It’s pretty easy to spot how religion works: it usually stresses the importance of faith, urging people to skip the crucial step of asking for evidence. The author of John’s gospel is explicit about this approach. The apostle Thomas happened to be out when Jesus made a post-resurrection visit to the group, and was skeptical of their story. A week later, Thomas was present when Jesus showed up again, and the latter said to him (20:27-28):

“Put your finger here and see my hands. Reach out your hand and put it in my side. Do not doubt but believe.”

Thomas answered him, “My Lord and my God!” 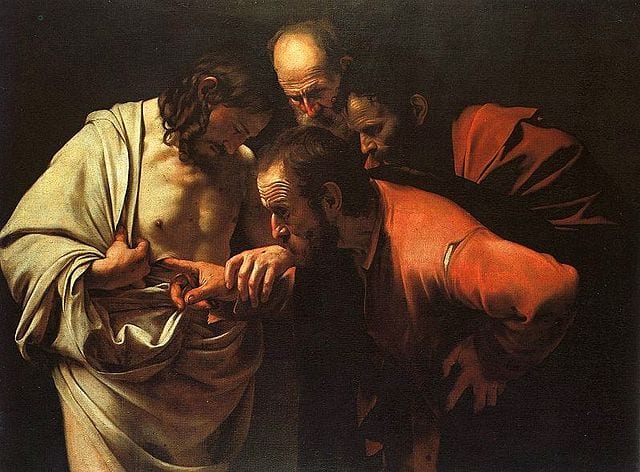 And then he got a bit of a scolding from Jesus:

“Have you believed because you have seen me? Blessed are those who have not seen and yet have come to believe.”

You’re blessed if you don’t care about evidence.

Not that Jesus couldn’t have said such a thing—religious leaders have always been fond of this advice—but this is a case where Christians should balk, i.e., they should doubt the whole story. It doesn’t appear in the first three gospels, but shows up here in the last gospel to the written. What was John’s source, so long after the events described? Especially in light of John’s fertile imagination, we can suspect that the story is an invention.

Caravaggio, by the way, graphically depicted Thomas sticking his finger into the sword wound in Jesus side. John’s gospel is also the only one to report that a Roman soldier stuck a sword into Jesus—on the totally phony excuse that scripture (i.e., Zechariah 12:10) was thus fulfilled; that text had nothing whatever to do with Jesus. John was making stuff up. Christians should get in the habit of being curious: what are the sources and documentation to back up the story?

Of course, this is a favorite Jesus story because it is taken as proof of the resurrection—the ultimate miracle claimed by Christians. But all Bible miracle stories, including this one, fall far short of minimal standards of evidence. Hence the appeal, forever, by religious leaders to believe without evidence. Faith is declared the supreme virtue. “Just take our word for it” has been the approach of priests and preachers forever.

In his new anthology, The Case Against Miracles, John Loftus stresses David Hume’s argument that the evidence for a miracle would have to be overwhelming, of an order of magnitude of the claimed miracle itself (see Loftus’ essay, “Extraordinary Claims Require Extraordinary Evidence”). The nature of scripture—stories with no cited sources, based on hearsay, deriving from an ancient superstitious mindset—rules out taking the ancient miracle stories seriously.

Of course, Christian apologists are not easily thwarted. And one way to make the case that the Biblical miracles couldhave occurred—thus we don’t have to be worried about the dodgy ancient sources—is that miracles still occur today. Lots of them; God is still at it. This is the tack taken by New Testament scholar and apologist Craig Keener in his two-volume book (1,200 pages), Miracles: The Credibility of the New Testament Accounts.

Darren M. Slade offers his analysis of this work in his essay, “Properly Investigating Miracle Claims,” in the new Loftus anthology.

Yes, it’s possible to put together a 1,200-page collection of miracle tales, but wouldn’t that require another 1,200, 2,400, or 4,800 pages of investigative reporting aimed at verification? At the outset of his article, Slade notes that

“…Keener’s work is limited in its apologetic value, oftentimes proving only anecdotally that people continue to believe they have witnessed or experienced a miracle. The author not only admits these limitations, but he also declares that he avoided a thorough fact-finding investigation to authenticate the credibility and accuracy of these stories.” (p. 114)

Of what value are thousands of anecdotes? “…people continue to believe they have witnessed…” It’s so common for the faithful to argue that the gospel miracle accounts can be traced to eyewitnesses—and thus are authenticated—but there is no documentation whatever for that. When they try to transfer that argument to miracle claims in the modern world, verification is even more problematic.
Slade mentions a 2019 report by the Innocence Project, which

“…exonerated 361 persons through DNA where over two-thirds (71%) were wrongfully convicted due to faulty eyewitness testimony.”

“Mistaken eyewitnesses account for more convictions of innocent persons than all other causes combined.” (pp. 131-132)

Indeed, this is but one example that Slade provides in his thorough survey of investigation/verification techniques now used. His essay is a handy resource for countering easy acceptance of miracle accounts. Folks might be in awe of Bible stories—because they’ve been taught to be in awe of Jesus—but these days we have CCTV and so many other tools to separate fact from fiction; as Slade points out:

“…stories of a fantastic nature ought to be thoroughly investigated according to the rigors implemented in judicial interviewing and interrogation tactics with an awareness of and attention to the possibility of deception, as well as the psychological variables known to affect the suitability and accuracy of eyewitness testimonials.” (p. 115)

Especially when believers bring fervent enthusiasm to their embrace of “heartfelt” miracle accounts, that’s a red flag that caution is in order. Has judgment been clouded, have critical thinking skills been abandoned? Slade identifies how truth can be jeopardized:

“…any miracle investigation that relies on personal testimony ought to scrutinize a claimant’s credibility, suitability, and accuracy in order to eliminate reasonable suspicion of deceit, suboptimal settings, or psychological distortions.” (p. 116)

Slade points out that Keener believes that many of the miracle anecdotes he has collected are real miracles—tricks performed by God himself—but Keener is on an apologetic mission:

“The problem is that a theistic worldview (to the extent possible) should not play a determinative role in the explanation process when a thorough investigation of the evidence has yet to occur.” (p. 118)

“There is significant potential for these stories to be fabricated, erroneous, misinterpreted, inconsistent, prejudicial, and fragmentary.” (p. 118)

Slade describes a couple of tools that have been developed to detect false testimony—wouldn’t these have been useful when scripture began to gel at the hands of “inspired authors” so long ago?

“While some studies suggest that reporting bizarre occurrences is actually a sign of credibility, these same unusual details could, in reality, be the result of imagination inflation, dissociation, and fantasy proneness. Thus, investigators (wherever possible) should account for this possibility by administering two specific tests in particular.

“The first is the Dissociative Experiences Scale (DES), which assesses whether people are prone to confusing their own fantasies with actual memories. The second is the Creative Experiences Questionnaire (CEQ), which evaluates whether a person is prone to over-imaginative fantasies.” (p. 129)
But in the rush to thank God for his miracles—and thus come to Christianity’s rescue—how many of the faithful even want to ask, “Are these accounts open to falsification?”

One especially helpful short section of Slade’s essay (just two pages) is titled, “Biased Memories.” So little account is usually taken of the role of the human brain in shaping our perception and interpreting of reality; Slade points out, “There are three stages to memory: encoding, storage, and retrieval.” (p. 133) There can be distortions in all of these stages:

“…memory recall often appears in story form, which eyewitnesses then mold in order to captivate their audience and validate their actions and beliefs. The problem is that frequent retellings of a story tend to result in altering, adding, or omitting past details…” (p. 134)

This truth about memory recall, by the way, scuttles the confidence so often expressed about “reliable oral tradition” lying behind the gospel accounts. What are the chances that Jesus stories—especially about his miracles—were passed on accurately for several decades before the gospel writers got hold of them?

Near the end of the essay, Slade goes to heart of Keener’s flawed methodology:

“Oftentimes, Keener’s ‘extranormal’ explanations rely on the lack of falsifying evidence, which is simply an argument from ignorance…his ‘God-of-the-gaps’ tendencies, where he believes a supernatural agent plausibly instigated a miracle, engages in causal oversimplification. He is right that a naturalistic explanation, such as a placebo effect or psychoneuroimmunology, does not preclude God’s involvement. However, is God really a necessary or even sufficient explanation for the event in question?” (pp. 142-143)

Where does the craving for miracles get us? Do you really want dramatic miracles to prove God to the world? Doesn’t that go against Jesus’ warning to Doubting Thomas to believe without evidence? Yet Keener came up with 1,200 pages worth of miracle evidence: if only we can prove the miracles, then, by golly, we have the evidence! So we don’t have to rely just on faith. What a relief.

What we’d actually like, of course, is for God to really step up to the plate. Prove his mettle and his meddling, unmistakably.

On 10 June 1944, as German soldiers were retreating from France, they massacred 642 people in the village of Oradour-sur-Glane, including more than 400 women and children, who were shot in the church. What more would be needed to get God’s attention? What better time for one of his miracles?
They were shot in the church. Let. That. Sink. In. Don’t people show up at church because, there especially, God will be paying attention to their presence and prayers? How does faith survive this obvious absence of God? Might I suggest that the faithful cease their emotional investment in Lourdes and ponder Oradour-sur-Glane instead?

But here we have a book about miracles, 1,200 pages, written by an apologist. Stories, stories, and more stories. But, as Slade notes, Keener

“…freely admits that he has an invested interest in demonstrating the authenticity of the New Testament.” (p. 144)

John Loftus didn’t match that massive page count, since The Case Against Miracles is only 560 pages. But it’s more than a match in terms of critical thinking and science-based reasoning.
Darren Slade sums up the collapse of the anecdotal approach to defending faith:

**Editor’s Questions** What were you taught about miracles?  How much did you believe in them?

Bio: David Madison, a Clergy Project member, was raised in a conservative Christian home in northern Indiana. He served as a pastor in the Methodist church during his work on two graduate degrees in theology. By the time he finished his PhD in Biblical Studies (Boston University) he had become an atheist, a story he shares in the Prologue of his book, published in 2016: 10 Tough Problems in Christian Thought and Belief: a Minister-Turned-Atheist Shows Why You Should Ditch the Faith. This essay is reposted with permission from the Debunking Christianity Blog

Nonreligious
Getting Back to Normal
Rational Doubt
TRENDING AT PATHEOS Nonreligious