Editor’s Note: Living, as I do, in an overwhelming sea of liberals, it’s hard to imagine life in one of the many areas in the US that overwhelmingly and fiercely support Trump.  This former pastor tells us how he handles it – and loses a few campaign signs in the process. /Linda LaScola, Editor

Recently, a woman wrote a letter to the editor of the West Bend News — a weekly publication. In the letter, the woman quotes Psalm 58:1-11 — implying that Democrats are wicked, evil liars and snakes —  and then proceeds to rail against the Democrats for their slights against one President Donald J. Trump, also known as the Orange Menace. 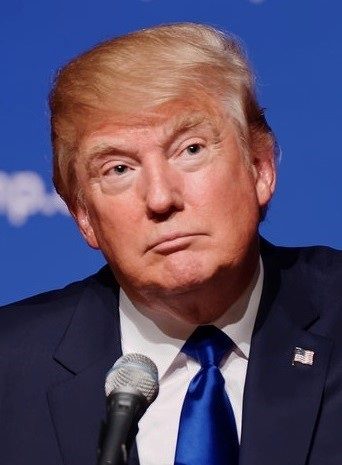 Here’s the non-Bible part of her letter:

God has the last word, that’s why Donald Trump is in office. Put protection around the President. No weapons against the President Donald Trump will prosper. In Jesus’ name thank you Lord. Protect the security guards that lay their lives down for the President. A divided house won’t stand. You’re trying to get dirt on the president and wasting taxpayers’ money (why) maybe you should look in your closet. If you’re without sin you can cast the first stone. Democrats are using the hatred act against our President Donald J. Trump. God’s still on the throne, “Avenges is mine,” said the Lord (not yours).

I am hesitant to say much about this letter due to the fact that its writer is almost 80 years old and a lifelong Republican. On the other hand, her letter is a perfect example of the Christian-Republican union that is prominent among older residents of rural northwest Ohio and northeast Indiana. In 2016, Donald Trump easily won the counties surrounding my home in Ney. Come November he will carry these counties again, likely by a higher margin than he did in 2016. The same will happen with the elections of local and state Republican candidates. Democratic candidates, if they run at all, will likely be thrashed, leaving them to wonder why they bothered. When over seventy percent of locals vote Republican, it is impossible for Democrats to win elections. Locals of The Great Generation and Baby Boomers overwhelmingly vote Republican. While the future rests with younger residents, many of them are indifferent to politics, don’t vote, and those who are politically active find that local Democratic Party officials are often clueless about the issues affecting younger Americans. I don’t know of one local active Democratic outreach to younger voters. Sadly, the people running local Democratic offices are generally in their 50s and up.

The aforementioned letter writer doesn’t say anything that I don’t hear locals say at ballgames, restaurants, or other public places, or write in letters to the editors of local papers or post on social media. I shoot photos upwards of a hundred local basketball/baseball/football games, volleyball matches, and track meets every year. I am retired, so I do this as a way to give back to our local school district and provide student-athletes and their families with quality photographs. Keeps me busy, allows me to meet new people, and takes my mind off the unrelenting chronic pain I battle each and every day. Doing so, however, exposes me to far more Trumpist Christian bullshit than I care to see or hear.

As I mentioned above, most locals vote Republican. Those I meet in public often “assume” that I am part of the Trump tribe. This is especially true on social media. I can count on two hands local Democrats I have met. And those who are as liberal as I am? “One is the loneliest number”, Three Dog Night sang in 1969, and I find that to be true when it comes to locals who line up with me politically. I’ve learned to accept that I am a vampire-like outlier. Even among Democrats, my view on abortion is a minority viewpoint. This is due, of course, to the pervasiveness of conservative Christianity. The overwhelming majority of the letters to the editors of the Defiance Crescent-News over the past decade advocating pro-choice positions were written by yours truly. I love living in rural Ohio, but politically I find it impossible to feel at home.

If locals want to read my pointed viewpoint on American politics, Donald Trump, the culture war, and Evangelical Christianity, they have to go to this blog, Twitter, or my Facebook page. On my personal Facebook wall, I am decidedly a-political and a-religious. Many of my Facebook friends are not so inclined, especially local Republicans I am “friends” with. Trump worship is common, and libtards and evil commie socialists — also known as Bruce “Santa Claus” Gerencser — are routinely savaged, abused, and slandered. I have no doubt that many of these people think the West Bend News letter writer is spot on with her God- and Bible-inspired attack of her Democratic neighbors and the Party in general (though I am sure many of them would wince at her atrocious grammar).

Later this week, I will plant in my front yard campaign signs for Bernie Sanders, Elizabeth Warren, and Pete Buttigieg. I am hoping one of the three will be the Democratic candidate for president. I hope one of the other two will be the chosen candidate’s vice president. In 2016, you may remember, I prominently displayed my support for Sanders. I only knew of a handful of other locals who were willing to show their support for Bernie. To do so is socially and economically risky. My sign “disappeared” before the election. It was, best to my knowledge, stolen by a Trump supporter who could no longer stand looking at my sign as he or she drove by my house. Here’s a screenshot of a discussion Trump supporters had about my Bernie sign in February 2016: 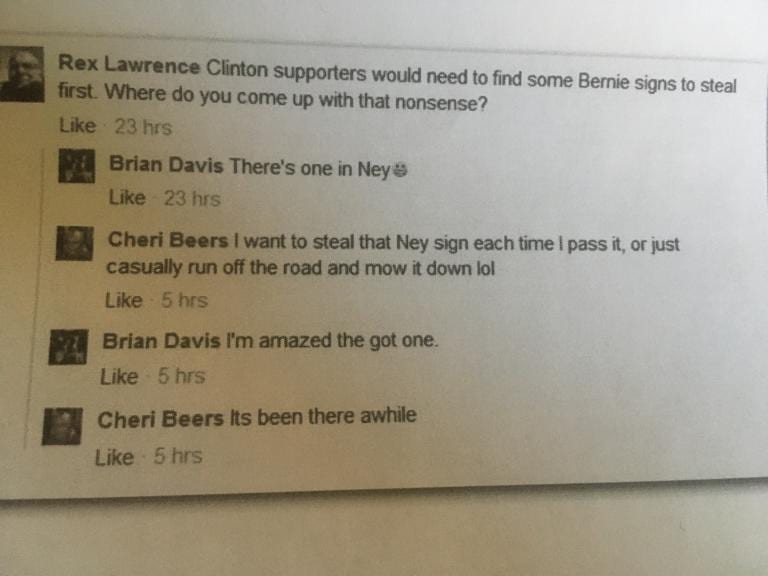 I decided not to file a theft report, but this time around, if my signs come up missing, I plan to file a police report. Or beat the shit out of the thief with my cane.

Such is life in rural northwest Ohio. There’s much I love about the place of my birth, home to my parents, grandparents, children, and grandchildren. When we returned to this area and bought a home in 2007, we decided that there would be no more moves in our future. There are days, however, when I am so discouraged over the local and national political climate and the shenanigans of the most unfit man to ever sit in the Oval Office, that I want to move to a remote area and live off the grid. 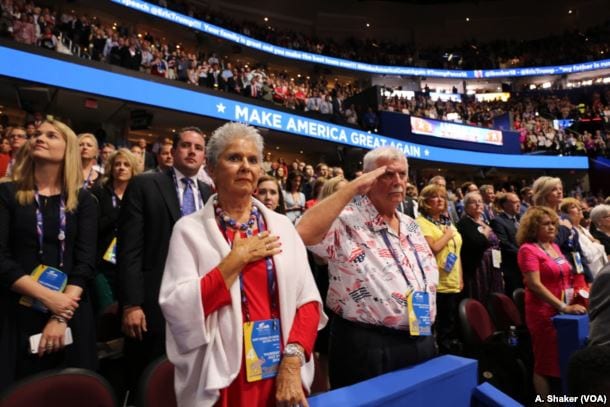 President Trump and his supporters have literally worn me out emotionally. The constant lies, distortions, and mixing of church and state makes me sick. Recently, Trump released his budget. More money for the military, Trump’s anti-Mexicans wall, and severe cuts to social programs and regulatory agencies. No surprises. Trump and the Republican Party will not rest until they destroy every vestige of FDR’s New Deal and the social progress the United States has made since the Great Depression. What’s a thoughtful liberal to do? Vote. What else can I do, but cast my votes for people who, at the very least, promise to stem the tide of the Republican/immoral capitalistic/theocratic Christian horde? I know my vote locally is little more than pissing in the face of a hurricane. There’s no chance for local Democratic candidates to win elections.

I’m not being pessimistic or fatalistic. It’s just the facts of life here in northwest Ohio. I do, however, believe that on the state and federal level, my vote can make a difference. Will Democrats unseat President Pussy-Grabber in November? Maybe. My greater hope is for Democrats to retake the Senate and strengthen their hold on the House of Representatives. If Democrats fail on every front, I am headed to the wilderness with a bottle of whiskey in each hand and a backpack of weed. I feel as if liberal/progressive Democrats have one last opportunity to turn back and repair the social and economic damage done to our Republic by Trump, Republicans, and spineless, money-grubbing corporate Democrats. (And even if they succeed, the damage done to our judicial system by Trump will take decades to undo.)

In 2008, Barack Obama called for hope and change. In 2016, Bernie Sanders called for a revolution. What will be our rallying cry for 2020?

**Editor’s Question** It’s the same as Bruce’s: What do you think the Democrats’ rallying cry should be for 2020?

February 20, 2020
Who Will Prevent Death In The Desert?
Next Post

February 27, 2020 An Atheist Pastor’s Approach to Lent
Recent Comments
28 Comments | Leave a Comment
Browse Our Archives
get the latest updates from
Rational Doubt
and the Patheos
Nonreligious
Channel
POPULAR AT PATHEOS Nonreligious
1