Life After Death: A History of the Afterlife in Western Religion

Life After Death: A History of the Afterlife in Western Religion July 6, 2020 Linda LaScola

Editor’s Note: This post, written by one of the few former “spiritualists” in The Clergy Project, helps explain how the concept of heaven is so fundamental to religion.  For me, after a while, the expectation of a contented and perpetual afterlife was all that held me to religion. I liked the idea of living forever and didn’t give much thought to how it would work out.  Also, I was sure I would go to heaven, even though I was no longer following the rules of any religion. Turns out, this makes me pretty typical of most people, religious or not.  The afterlife is a pretty mainstream notion.  Maybe hope for an afterlife is what binds so many people to religion and the many different beliefs that accompany religions. Maybe non-religion is growing because the cultural need for an afterlife is waning.  Hmmm.  /Linda LaScola, Editor

Afterlife notions are mirrors of our cultural and social needs

Our notions of heaven and the afterlife reflect what is valued in our Western culture–today it’s eternal youth, reunion with loved ones, and spiritual prowess.

In an epic 866-page book, Life After Death: A History of the Afterlife in Western Religion, 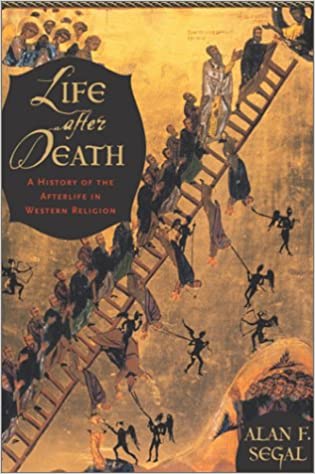 For 4,000 to 5,000 years, society’s afterlife beliefs have endlessly morphed and twisted to fit mortal desires and social needs.

Romping through ancient civilizations of Egypt, Mesopotamia, Canaan, Iran, Greece and Christianity, Segal unveils the spellbinding metamorphosis of Western notions of life after death. The fore-bearers of contemporary afterlife beliefs included Rabbinic Jews, the Book of Daniel, the Dead Sea Scrolls, the New Testament Gospels, and Church Fathers such as Augustine and Aquinas, the Qur’an, Shi’a mystics, Zoroastrians, fundamentalists, and end-times Apocalypticists.

Our journey through the catacombs of afterlife beliefs is broadly summarized in these excerpts from Segal’s Life After Death: A History of the Afterlife in Western Religion.

The identity of the person was symbolized in the very image of the person, represented sometimes by the corpse itself, first perfected into an artful representation by mummification, then transformed into an eternal star to enjoy the breeze on a day of leisure in a perfected Nile valley. p 700

In Mesopotamia the afterlife was less optimistic; it was a poor consolation compared to the Egyptian notion of immortality of the gods…we never become immortal. Everyone must die. The fate of the dead is hardly pleasant in this culture, condemned to shadowy existence in the underworld. Gilgamesh tried for immortality but lost it. Utnapishtim, the only mortal who had escaped death, explains that no one else will ever be given this divine reward. p 700

Israelite notions of the afterlife emphasize the same truth as the Mesopotamian and Canaanite ones: Like us, animals have earthly life, we have life and, if we act properly, we will gain wisdom; but only God has immortality. p 701

To summarize, so far: The person dies. No one escapes death. Only God or gods have immortality in Egyptian, Mesopotamian, and First Israelite/Canaanite cultures from 3500 to 500 BC.

Enter the Second Temple period circa 500 BC.

By the time the Persians and the Greeks made contact with Jewish culture, both had developed significant myths that spoke of conquering death…Zoroastrianism was virtually the national religion of the elite Persian rulers and left us clear evidence of bodily resurrection and a beatific afterlife. These surely stimulated and encouraged similar notions in Jewish life, though we lack proof of how the transfer took place. p 701

Greeks: Immortality is for Heroes 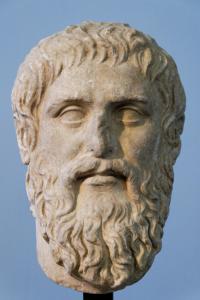 The early Greeks could envision a hero’s choice of fame over immortality, the very choice which Odysseus makes at the beginning of the Odyssey; they could envision a ritual process of immortalization in the Eleusinian Mysteries, perhaps aided by drug-induced experience, make this mystery religion into a weekend “rave”. Or they could believe the proofs of the immortality of the soul offered by Plato’s Socrates.

All these [Greek] notions were adopted into Israelite culture, after being retailored for adoption into a monotheistic scheme. The most long-lasting Greek contribution to Jewish culture was from the aristocratic, Platonist intellectual elite of Greek society that said that the soul was immortal. In return for a life of moderation and intellectual development, the soul went upward to receive its astral rewards. p 702

Christianity: Wanted nothing to do with soul

Apostolic Christianity at first wanted nothing to do with immortality of the soul… Christianity’s beginnings were in the apocalyptic groups that believed in resurrection of the [physical] body [after death]. p 705

As Christianity moved slowly around the Roman Empire and slowly up the social ladder, it met a much more formidable form of the argument against the uniqueness of Jesus’ post-mortem existence: the immortality of the soul…The soul was immortal by nature in Platonic thought, not needing the redemptive sacrifice of Christ…The doctrine of the immortal soul was eventually adopted because it allowed Christianity to talk about an interim time when the good could be rewarded and the evil punished without waiting for the delayed, end-of-time [apocalypse]. p 707

Standing Back to Look for Patterns

With such an enormous time span to look at, some interesting reassurances emerge. First, the basic questions of life four or five thousand years ago are still the questions of today but our answers are far more comforting to us: We see a refreshing trend to include more and more people within the rewards of the afterlife. p 709

…Afterlife notions are mirrors of our cultural and social needs, available to development and manipulation, and that they tend to mirror our social wants. p 710

The first victim is the reassuring notion that the afterlife is part of unchanging, revealed truth… The notion of heaven and the afterlife always reflects what is most valuable to the culture. p 710

Humans have been traveling to heaven to see what was there before heaven was a place where the beatified and sanctified dead went. But that is no guarantee that they are true. p 711

Afterlife beliefs reflect the cultural and social needs of the time: ever-changing reflections of our immortal aspirations.

In 866 majestic pages, Life After Death: A History of the Afterlife in the Religions of the West, reads like a smart novel and examines 5,000 years of development of afterlife notions in Western culture.

Understanding how life after death beliefs evolved doesn’t take away from the poetry. Like beauty and love, says Segal, notions of life after death are no less important because they are unverifiable.

For more from Life After Death; see my post Religiously Interpreted States of Consciousness.

**Editor’s Question** How have your views of/belief in the afterlife evolved as your religious beliefs evolved?

Bio: “Scott” was a monk at the Self-Realization Fellowship (SRF) ashram for 14 years before leaving to complete his education and enter the business world.  Raised Roman Catholic, he got into eastern religious practices and was influenced in his 20’s by reading The Autobiography of a Yogi by SRF founder Paramahansa Yogananda. He is now a member of The Clergy Project and a successful business consultant.  He discusses the hidden, and sometimes dangerous side of meditation practices, systems and groups at SkepticMeditations.com, where this essay was originally posted.  It is reposted with permission.

July 2, 2020
The Corrosive Effect of Christian Excuses
Next Post