And You Want Me to Be Grateful?

Editor’s Note: Here we are in another Christian Holy Week filled with the usual observations of the triumphal Palm Sunday, Holy Thursday’s foot washing ceremony and Good Friday’s reenactment of the Crucifixion of Jesus. This year, continuing pandemic restrictions mutes these ceremonies, which makes many Christians very sad.  Personally, I only miss the wonderful, plaintive Good Friday music usually offered at the National Cathedral and the equally wonderful festive Easter music that can be heard in any Christian church.  The essay below was first written in 2004 in a secret blog, by a clergyman who is now gratefully out of his clerical role.  Then, however, he was personally suffering with the idea that God ordained suffering of his own son. No more.   He left that thinking completely behind when he left the clergy. /Linda LaScola, Editor

God told Abraham to take his son–his only beloved son*–up a mountain, tie him to an altar, and kill him as a sacrifice. (Genesis 22:2). It is said that God was testing Abraham’s faith and that Abraham reasoned God could raise the boy back from the dead if he chose (Hebrews 11:17-18).

I have always hated this story, and I never believed it really happened. After we had our two sons, I put God on notice:

“I will serve you in ministry, but if you take my children, the deal’s off.”

This is holy week. Yesterday, the children came into the sanctuary waving the palm branches, 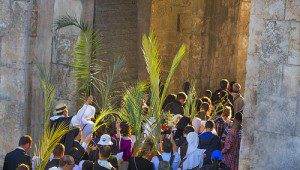 and later in the week we’ll celebrate Good Friday and I’ll have people come forward to place their hands on the cross as they remember the story of Jesus’ crucifixion.  And many of them will cry–a few of them will sob. 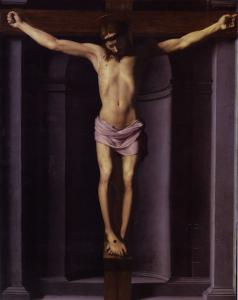 Over the years, the story of Christ’s sacrifice for humanity has made less and less sense to me. I remember when I was still praying that I told God,

“It’s hard for me to respect a father who just lets his child die in front of him. If I were you, I would have let the world go to hell so I could keep my son safe.  If I had your strength, no one would ever hurt my child. Any father who doesn’t try to protect his child is a failure as far as I’m concerned.”

I switched over to John’s image of Jesus as a deity completely in control of his destiny and so he chose to sacrifice himself.  Self-sacrifice I can understand and perhaps even respect in certain contexts.

But then again, what’s the deal about the need for sacrifices? If there is a benevolent, gracious god, does he really need something to die as punishment for wrongdoing? Why must that happen? Forgiveness does not exact penalty.

I understand that cultures have often invented a story that explains how guilt can be resolved and prosperity can be gained. Babies and virgins have been killed for just such reasons in lots of cultures, and Christians abhor that. Yet we’re not just okay, but we’re grateful, in fact we praise our God who sacrificed his Son.

I don’t believe it anymore.  But say that I did. Say I still thought it was all true.

I choose not to worship a god who does these kinds of things and expects us to be grateful for it.

*Actually, Abraham had another son born by one of his servants, but that’s a story for another time.

**Editor’s Question** If you ever thought about what kind of a father would set up his son to suffer and die, what conclusions did you reach?

Bio:  David Mercer, aka “Stan Bennett,” was the “Stan” who was featured in the CNN documentary, Atheists: Inside the World of Non-believers  and the Canadian documentary, Losing Our Religion.  David was a pastor for thirty-five years in Texas and Oklahoma until he quit and moved to Orlando, Florida, where he met and married his wife, Sylvia.  David is now fully out of the closet as an agnostic.  He is a life coach, a teacher, and a storyteller. He is the author of the blog Deep Calls.  You can also find him on his Author Page on Facebook.

April 1, 2021 Another COVID Easter and Springtime
Recent Comments
0 | Leave a Comment
"When I realized christianity was bunk, my overriding emotion was that I felt silly for ..."
Lark62 Do We Have to Choose between ..."
"Chris right off the bat, the problem is glaringly apparent . "I was writing SPECIFICALLY ..."
carolyntclark Do We Have to Choose between ..."
"it's a start."
Linda LaScola The 11th Commandment: Be Kind, Don’t ..."
"Haven't had any luck convincing my Hoosier evangelical parents or sisters of that. But have ..."
mason The 11th Commandment: Be Kind, Don’t ..."
Browse Our Archives
get the latest from
Rational Doubt
Sign up for our newsletter
POPULAR AT PATHEOS Nonreligious
1