How Fundamentalist Christianity Can Turn People into Raving Lunatics

How Fundamentalist Christianity Can Turn People into Raving Lunatics May 6, 2021 Linda LaScola

Editor’s Note: Just yesterday, a liberal Jewish friend wondered how so many Republicans (with some notable exceptions in Congress, like Liz Cheney and Mitt Romney) could blindly follow an obvious shyster like Trump. When I answered “because so many Trump supporters are fundamentalist Christians” she wanted more information.  Well, here it is, in this post and the attached video.  This is reposted with permission from the blog of a former fundamentalist pastor who knows this syndrome better than I. /Linda LaScola, Editor

I am not one to write inflammatory, hyperbolic headlines, but for this post, it will be clear to readers that the chosen post title is not unfair nor does it misdescribe the subject matter. The following video features Sean Feucht, a, uh, a, well, I am not sure what to call him. Let’s go with Trump-supporting Fundamentalist Charismatic preacher and worship leader with deep ties to Bethel Church in Redding, California. (Please see Bethel Redding, a Dangerous Evangelical Cult and Do You Really Have to Ask if Bethel Redding is a Cult?) Feucht describes himself as a:

According to Feucht’s website, he currently operates three ministries:

Currently, Feucht is traveling the country holding “spontaneous” rallies. (The rallies are, in fact, quite organized.) Hundreds and thousands of primarily white Evangelical Christians flock to Feucht’s rallies. What follows is a video of Feucht’s latest rally in Little Rock, Arkansas. The video is six minutes long. PLEASE take the time to watch all of it. If you do so, you will understand why I chose the title I did for this post.

Here’s a link to a recent rally Feucht held in Springfield, Missouri.

Feucht is a rabid anti-masker, so it should come as no surprise that none of the rally attendees is wearing a mask. Every rally Feucht holds is a super spreader event, yet thanks to warped interpretations of the separation of church and state and the First Amendment, he and his merry band of minstrels are exempt from state health mandates. Truly, with God all things are possible.

What troubles me is the religious hysteria shown in the video. Using rock music and psychological manipulation, Feucht and other rally leaders whip the crowd into a frenzy. While some Evangelicals might suggest that the behavior of rally attendees is fueled by Charismatic beliefs and practice, not True “Biblical” Christianity, I have witnessed similar insanity during Independent Fundamentalist Baptist (IFB) conferences and camp meetings. The root issue is psychological and emotional manipulation. The very same techniques that Feucht uses were used to foment the insurrection at the U.S. Capitol on January 6, 2021.

The people in the aforementioned video are not, for the most part, uneducated, ignorant hillbillies. These people are educated, working-class people, people who have good jobs, own their own homes, and drive nice automobiles. If the Insurrection taught us anything, it is this: smart, educated, financially secure people can behave in ways that look a lot like the scenes from the movie One Flew Over the Cuckoo’s Nest. When people gather together in like-minded tribes, it is easy for the Sean Feuchts of the world to manipulate them psychologically. I was a pastor for twenty-five years. I was, by all accounts, a well-spoken orator. I knew how to use the Bible, religious verbiage, and stories to deliver sermons that moved people to action. As I look back on the 4,000+ sermons I preached, it is hard not to conclude that I manipulated people to achieve a religious objective — be it salvation, getting right with God, winning the lost, fulfilling my agenda, or filling the church’s coffers. I may have thought, at the time, that I was doing God’s work, that my motives were holy and pure, but the fact remains that through my words (and behavior) I “led” people to do things they might not do otherwise.

What I found most disturbing in this video was clips of children being overcome with emotionalism. While Feucht and his defenders will claim that what is witnessed on the video is “God,” it is clear, at least to me, that these poor children were whipped into an emotional frenzy by an expert modern-day Elmer Gantry.

I should note, in passing, Feucht’s (and his crew’s) crass, manipulative appropriation of Native American (called First Nation People in the video) culture. I wanted to scream when I watched indigenous people wrapped in what are commonly called Indian blankets. Feucht is evidently unaware of the history Indigenous people have with Christianity, including blankets given to them infected with diseases such as smallpox.  [Editor’s Note: there is some evidence that this happened, but there is not evidence that it worked.]

**Author’s Question** What do you think of this video?

**Editor’s Question** What do you think motivates Trump supporters who are not religious?

Bio:  Bruce Gerencser lives in rural Northwest Ohio with his wife of 40 years. He and his wife have 6 grown children and 12 grandchildren. Bruce pastored Evangelical churches for 25 years in Ohio, Texas, and Michigan. He left the ministry in 2005 and in 2008 he left Christianity. Bruce is now a humanist and an atheist. He is also one of the original members of The Clergy Project, which began in 2011. He blogs at The Life and Times of Bruce Gerencser,  where the above post originally appears.  It is reposted with permissio 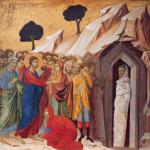 May 3, 2021
The Lazarus Story Goes Off the Rails
Next Post