Update: Kathy Miller, president of the Texas Freedom Network, (who was featured in the movie, The Revisionaries) will join the rest of us at the Houston Museum of Natural Science on Sunday August 4th for Answers In Science.

It’s a seminar to counter the claims of creationism being made by Ken Ham of answersingenesis to the Texas Homeschool Coalition on the same weekend. Ham still does not acknowledge the debate he retreated from, (mentioned in the preceding blog post) but he has warned his own conference about a ‘handful’ of protesters who may be outside the Hotel where he will be speaking. 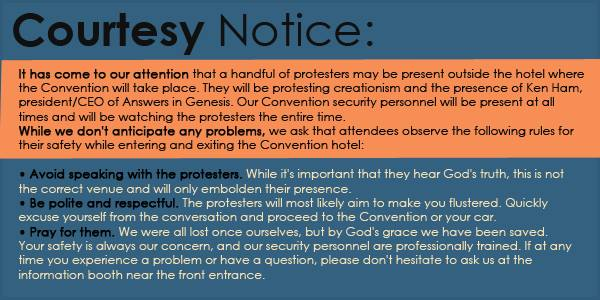 Houston Atheists will be there out on the curb this Saturday August 3rd in a peaceful demonstration promoting actual factual science over the dogmatic propagandizing going on inside. Appropriately silly costumes might be fun and are encouraged, but be sure to bring ice chests, water, shades, headware, etc. and especially SIGNS!

Here are some examples that were already made for this event. We don’t want to attack religion in general, nor homeschooling either, (we will explain why on Sunday) but our signs should criticize the wholly dishonest pseudoscience that creationism is. So what will your sign be?

July 27, 2013
The sudden suspicious silence of answersingenesis
Next Post