Interstellar and the dangers of anti-intellectualism.(Minor Spoilers)

Although Interstellar is set in a dystopian future, one of the scenes is an all too familiar page borrowed from the present. The setting takes place in the future where crops are dying from a plant pandemic of some sort of blight. With plants gone, all life will become extinct as the atmosphere becomes unbreathable. And of course, the extinction of plants or the producers at the base of the energy pyramid will cause irreparable harm to the biosphere.

Why don’t they genetically modify crops? That question isn’t answered as this movie is a physics showboat. The physics are top notch, as they consulted Kip Thorne, an actual physicist for the effects. Modeling a black hole required using computer rendering software that had to be modified to do the heavy calculations involved in rendering just exactly how light, matter energy, and for that matter space and time behave around the colossal gravity of a black hole. The result was the most accurate depiction of a black hole in movie history. As a model, Thorne explained it actually taught him a thing or two that he could publish a few papers about. For physics geeks, Neils deGrasse Tyson and Phil Plait have reviewed the physics.

Physics aside, the movie also manages to model a possible outcome of the science and history revisionism that is going on right now by school boards and textbook publishers all around America. In the movie’s future timeline, America has been devastated by crop failures, and the last crop remaining is slated to fail within a human generation. All other intellectual pursuits such as space exploration have atrophied, as humanity focuses on agriculture and day to day survival. Even war-making has stopped.

Cooper, the main character, is a former astronaut and engineer.  He is called to a parent conference at his son and daughter’s school. He learns that his son was not selected by the government for college, and is slated to be a farmer. The principal explains the government can only afford to educate a slight minority of the population, as its resources are devoted to more practical matters like feeding everyone. His daughter’s teacher explains that Murphy, the daughter of a former astronaut, got into a fight over the new textbooks. The school adopted new textbooks that say that the Apollo missions were faked. The old moon landing conspiracies presented as fact to children.

It seems laughable but right now here in Texas, it is almost certain that our school board will adopt Social Studies textbooks that minimize the work of meteorologists and scientists on climate change. It’s actually a bit surprising that Interstellar didn’t use climate change as a catalyst for the human race migrating to another planet. Perhaps, they deliberately avoided climate change as so many people have been persuaded by anti-science propaganda that they would shut down, and not hear some of the other messages in the film.

Publishers are only partly to blame for minimizing climate change data as a “belief” that “some” scientists have. Texas textbooks are bound by a new requirement to reflect at least 50 percent of the social studies standards that the Texas School Board adopted. The board can reject a textbook for not conforming to standards they themselves overly politicized costing publishers millions of dollars. The publishers could technically also exclude the inaccurate standards as long as they include at least 50 percent of the standards overall.

The board will vote to adopt textbooks from publishers, and decide whether they conform at a public hearing on Nov. 18th. The publishers have reportedly made some improvements after the September hearings Aron and I testified at, but major problems still remain. The Texas Freedom Network and the National Center for Science Education are circulating a petition for people to sign to appeal directly to the hopefully more reasonable publishers than our infamous school board that is run by politically motivated fundamentalists.  There is also another petition to protest Moses being inaccurately being portrayed as having inspired the American system of government. Truth is stranger than fiction right?

The future timeline of Earth is yet undetermined. If we don’t want the possibility of a reality devastated by human ignorance like the dystopian world portrayed in Interstellar, scientists are going to need more support and the respect of not summarily outright denying what they are saying.

November 5, 2014
Texas: Not ready for a progressive woman Governor
Next Post 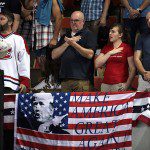 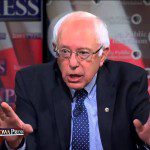