Here in Detroit waiting for a plane back to the triple digit heat in September of  Dallas TX. Where it is so hot that it’s been said:

“If I owned Texas and Hell, I would rent out Texas and live in Hell”  Philip Henry Sheridan

Here in Detroit, several people have complained to me about the 84 degree heat here that maybe feels like 94. And I suppose that is impressive for Michigan, especially given the school I gave a presentation at didn’t have Central Air. We air condition everything in Texas.

Lots of nice people here in Detroit like, Detroit’s CFI’s Skeptics in the Pub that we had a beer with.

On the way out in the airport, some person (hopefully it wasn’t an angel), saw fit to leave this reminder in the bathroom stall: 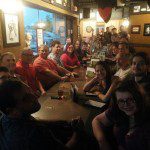 September 5, 2015 Weary of unwarranted Solispist Idealism
Recent Comments
0 | Leave a Comment
Browse Our Archives
get the latest from
RA
Sign up for our newsletter
POPULAR AT PATHEOS Nonreligious
1