Just like unattended graffiti, police departments are getting bolder and bolder about putting their Christian stamp on state owned police vehicles. In Hemphill County,  Sheriff James Pearson wants everyone to know that if you take offence to “I am the good shepherd. John 10:11” on vehicles paid for by atheist tax money too that you are “missing the point”. Which sort of begs the question exactly which “sheep” does this department see themselves as the good shepherd of? His reasoning:

New decals coming to all Hemphill County S.O. patrol units. “I am the good shepherd” John 10:11.

Proud to serve Hemphill County.**This was done to honor our commitment to all our citizens and community as a whole. Also to continue to memorialize our fallen. Nothing more, nothing less. Those that choose to be offended miss the point COMPLETELY. Be kind to one another.Decals funded by individuals….not county tax dollars. James Pearson, Sheriff

So apparently if you are not a Christian, and offended and have something to say about it you are a “keyboard hero”. You can’t really be surprised how bold this guy has gotten, the Governor here has pledged to defend all of the departments that have co-opted state vehicles to thumb their noses at non-Christians. So they get to spend state tax money to defend this nonsense, while orgs like The Freedom From Religion Foundation and the American Humanist Association put out multiple brush-fires everywhere  all financed by donors. According to Robert Ray of The Original Motto Project, the State of Texas has 17 counties with the motto “In God We Trust” on them, and they are joined by 10 Fire/EMS departments. But the “Show Me” state of Missouri is topping that with 30 police departments. They are sure showing us aren’t they? However this Sheriff is really going all out for Facebook likes. I find this statement to be a bit dubious:

This was done to honor our commitment to all our citizens and community as a whole.

So Jews, Muslims, and Non-Christians don’t count as citizens of the community? Do you now see why these mottos are exclusive? What if most of the citizens wanted “Allahu Akbar” on police vehicles paid for by everyone? Christians like the Sheriff are practically paving the way for it.

Despite his entreaty to people to be kind to one another. The Sheriff is brazenly and unkindly deleting concerned citizens’ (*update link to deleted comments) comments about this unconstitutional decision.

It’s all fun and games until the shoe is on the other foot, and another group becomes the majority and is in charge of the store. Hopefully for unneighborly Christians like Sheriff Pearson nonbelievers gain the majority rather than another dominionist group. Laugh while you can. *Update. My comment was deleted too. According to Robert Ray, the Honolulu (*edit) Police Department had to pay a 31,000 dollar settlement for deleting Facebook comments on their public Facebook page.  I don’t think my comment was that offensive and he said he wasn’t offended, but they deleted my comment anyways. 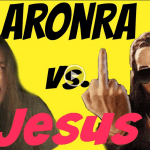 October 17, 2015 Interview at INR5
Recent Comments
0 | Leave a Comment
Browse Our Archives
get the latest from
RA
Sign up for our newsletter
POPULAR AT PATHEOS Nonreligious
1