Amber Barnhill recently moved her kids to a small south eastern Texas town called the city of China. There she found out what Lilandra and I have been complaining about for so long. All the local schools push their Christian religion. They do it overtly, during school hours, and as part of all curricular activities. They put crosses everywhere, promote prayer in every activity, and even have the elder students preaching to the younger ones as part of their daily morning assembly. There the students are required to learn and rehearse Bible verses. Welcome back to the dark ages.

So Amber complained to the school, and her complaint was largely ignored. Worse though, she got a lot of hate on social media, as you might expect; including quite a lot of threats from religious reactionaries who seemed as though they wanted to lynch her. None of these religious reactionaries had any idea what the issue even is. The zealots imposing their religion in public schools never understand that they’re even doing anything wrong. They think they’re being oppressed or attacked if they’re disallowed from indoctrinating everyone else’s kids. And it doesn’t help that all the kids in town have already been indoctrinated. Because they don’t understand what the problem is either, and and secular government requirement will invariably be seen as some sort of victimization, which feeds right into the typical Christian persecution complex. People like this never seem to understand the necessity of secular government until or unless they have to give fair consideration to Muslims. Then suddenly the Christians leap over to my side of the political spectrum, demanding separation of church and state just as I do. Hypocrites. 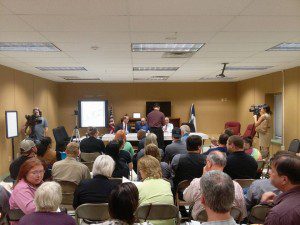 Knowing how no one in town seems to know what any of this is really about, we arranged to have a public meeting in the city hall of China Texas. It was actually sponsored by Humanists of Houston, Southeast Texas Humanist Alliance, and Lamar University’s Secular Student Alliance. These are all members of the Texas Freethought Coalition founded by my wife, Lilandra. My friend, Vic Wang hosted the panel discussion. On the panel were David Furlow of Americans United for the Separation of Church and State, Reverend Bob Tucker with the Foundation for Contemporary Theology, and former pastor Dan Barker of the Freedom From Religion Foundation. The purpose of this meeting was to explain to the town (1) what the separation of church and state means, (2) how the 1rst amendment protects freedom OF religion by necessarily insuring freedom FROM religion, and (3) that the United States of America is not in any sense founded on the Christian religion. 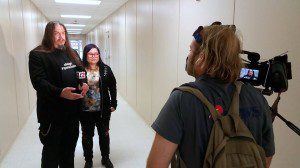 It was a full room, and there were a couple of TV news stations there, but very little actual coverage. We were interviewed by Channel 12, but the only story that made it out was on Channel 6. One thing that was largely absent were the Christians in that town, the very people we had come to address. Only a couple of them seemed to make it. What I’ve seen online is that most of our target audience simply refused to attend and are now protesting the mayor for even allowing us to meet there.

We recorded the event of course. Included in the video are a few of the many facebook posts that were saved by Amber Barnhill. Some of these include threats against Barnhill. Also note that the principle complained about having to get rid of Christian books in the school library, but she says there are plenty of books left about sex, zombies, witchcraft and evolution. That’s right, evolution is now in the same category as witchcraft. Remember that if you ever consider moving to any small towns in Texas. Notice also the posts that equate atheism to Satanism and Communism, or that say foreigners, atheists, Muslims, and democrats are not welcome in their community. Such a nice little town, huh? Like a blend of Mayberry and 17th century Salem.

This first video is the initial presentation: 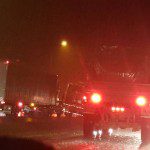 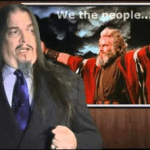 'Satanic' school head, pictured with a...
The Freethinker
Related posts from RA