Congratulations to Louisiana on Regime Change!

Just when you thought the chances for political change in the South were pretty bleak, relatively unknown State Representative  (D) John Bel  Edwards comes along and upsets the Republican applecart. It was quite a feat in a solidly Red State like Louisiana. His victory speech:

“This election shows us that the people of Louisiana in a time of deep cynicism about our politics, and also about our future, that the people have chosen hope over scorn, over negativity,” Edwards told a crowd of supporters at his victory party at the Monteleone Hotel. “I did not create this breeze of hope that’s rolling across our beautiful and blessed state. But I did catch it. “This breeze has its roots in the songs of the Louisiana Hayride, the food of our cajun ancestors, the spirituals of our African-American churches and the faith of our Italian … strawberry farmers, and the energy of Native Americans and our Hispanic immigrants. No I didn’t start the breeze of hope, but I did catch it. And so did you. We all caught that breeze. The people of Louisiana have chosen to believe we can do better, and by doing better we will be better. And I commit to you we will be better as a result of tonight.”

Louisianans do have cause to celebrate, as he is expected to go through with Medicaid expansion that was staunchly opposed by former Governor and Brady Bunch fancier Bobby Jindal. (Ding Dong the Wicked Witch is Dead!) Edwards also makes those queasy, who wish to land a sweet government contract opening charter schools that have a track record of  promoting creationism and underperforming in Louisiana. He also, inherited a 500 million dollar budget shortfall thanks to Jindal giving the store away with tax cuts to the wealthy.

Before we get all misty eyed with progressive optimism though, Edwards made campaign promises to govern from the middle. He promised voters he had conservative views on gun rights and abortion.

Still on balance, this election shows that the South is not an impregnable fortress of Religious Right Politics. Pretty sad though when the rest of the South is being led by Louisiana. Ahem… Texas! In celebration and solidarity with our fellow Americans in Louisiana let’s all breathe a sigh of relief that the guy, who said these things is gone and not our President:

Phil Robertson and his family are great citizens of the State of Louisiana. The politically correct crowd is tolerant of all viewpoints, except those they disagree with. I don’t agree with quite a bit of stuff I read in magazine interviews or see on TV. In fact, come to think of it, I find a good bit of it offensive. But I also acknowledge that this is a free country and everyone is entitled to express their views. In fact, I remember when TV networks believed in the First Amendment. It is a messed up situation when Miley Cyrus gets a laugh, and Phil Robertson gets suspended.Read more at: http://www.azquotes.com/quote/706535

Every time someone takes a sip of Guinness, a part of straight marriage dies,Read more at: http://www.azquotes.com/quote/1204784

My Christian faith teaches me marriage is between man and a woman. I’m not evolving with the polls. I’m not changing like Hillary Clinton or Barack Obama.Read more at: http://www.azquotes.com/quote/1284448

The recent riots in France demonstrate the problem European countries face where second and third generation immigrants still do not consider themselves French, German, or English. Read more at http://www.brainyquote.com/quotes/authors/b/bobby_jindal.html#kXtOtq8oJl94xXjH.99

They could also call themselves among other things Spanish, Portuguese, Italian, Greek, French-Chinese, etc. Just for fun let’s throw in a quote from Bobby Brady, who Jindal adopted his first name from: 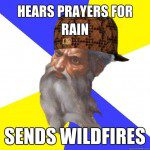 November 22, 2015 Anti-theist Answers to Christian Questions
Recent Comments
0 | Leave a Comment
"I once read a good part of the Quarn. Never got to its end, but ..."
David Brevik An Infidel Reads Sūrahs 67, 69 ..."
"Have cat, it won't accept any other pets. Which is fine, he's a nice kitty."
Karl Dubhe IV Dog gone it
"The fact that gawd chose that little circle of ignorance proves gawd hates intelligence."
Norman Parron An Infidel Reads Sūrah 21
"This drivel is so bad that I applaud you tenacity to stay with it. I ..."
Norman Parron An Infidel Reads Sūrahs 51 & ..."
Browse Our Archives
get the latest from
RA
Sign up for our newsletter
POPULAR AT PATHEOS Nonreligious
1

Of Hybrid Embryos, Human Rights, and...
Roll to Disbelieve
Related posts from RA