Why we don’t support media trolls

It’s not like we don’t see people reminding us in comments on videos asking Aron if he is going to respond to something a media troll said. Often fans of media trolls try to start off-topic comment battles on every one of Aron’s videos even on innocuous topics that are not controversial in the atheist community, like science education. All because he made one video in support of feminism a couple of years ago, which was quote-mined by a media troll a year ago.

As someone who writes the Living Science series to help Aron address scientific illiteracy, a problem often exacerbated by fundamentalist preachers, teachers, politicians,and parents  –especially where we live in Texas, I often resist the strong urge to engage these people.

The lack of caring that they show for the actual topic of the video –science education, by attempting to derail the conversation to media troll drama belies how often they claim to care about logic or reason. Whether you agree with Aron on the definition of feminism or not, there is a special kind of pettiness required to keep trying to derail the comments section of every single video he has ever uploaded in the last couple years, regardless what the subject is. This type of obsessive drama commenter makes a perfect tool for media trolls to drive traffic to their channels.

Most people that use the internet are familiar with what a troll is:

In Internet slang, a troll (/ˈtroʊl/, /ˈtrɒl/) is a person who sows discord on the Internet by starting arguments or upsetting people, by posting inflammatory,[1] extraneous, or off-topic messages in an online community (such as a newsgroup, forum, chat room, or blog) with the deliberate intent of provoking readers into an emotional response[2] or of otherwise disrupting normal on-topic discussion,[3] often for their own amusement.

But what is a media troll? Youtuber Kat Blaque made a video on the subject that I watched today that helped me to realize a few things about media trolls. She made the video because people often message her if she is going to address messed up, racist things that media trolls like Raven-Symone say:

Watch the video, but here are a few of Kat’s most salient points:

Aron and I often wonder if we adequately address the problems media trolls create on atheist media and particularly on youtube. When I first started being an active atheist mere years ago, I was exhilarated by the potential of the internet to spread reason from the most far flung corners of the globe to the insular communities where I grew up. The internet helped me to realize a lot of the things I had been raised to believe about science were demonstrably wrong.

Now media trolls, and people who use the internet to promote bigotry against the spectrum of marginalized peoples, have caused me to realize that the medium can also be abused to promote hatefulness. As a marginalized and hated minority, atheists should realize what being on the receiving end of socially based bigotry is all about. Atheist community pride often makes me dismayed when an atheist uses their platform to make uninformed comments on social justice issues that they often know very little about. For example, why would a popular atheist from England have the temerity to tell the Black American community how to react to racial slurs?

So what, if anything, is the proper response to media trolls in our community? They obviously don’t really care about atheists that want to be seen as “good without god”, or they wouldn’t popularize hateful, bigoted rhetoric for attention. Like Kat, I realize that they don’t care and often responding gives their platform attention. So the old saw, “Don’t feed the trolls.” is one way to address the problem.

Outside of YouTube, I have ignored drama-bait from other content creators that is personally insulting and inflammatory. However, the rule of thumb about whether to respond for me is how personal vs. informative a topic is. If someone is helping to circulate a harmful meme like Donald Trump and his xenophobia about Muslims citing a biased poll, then yes it can be informative to step in and rebut that. On the other hand, I don’t find an entire post about why someone thinks I am a poopy head to be that informative for my audience. Especially if the response is to someone who is engaging unfounded derogatory, defamatory, personally insulting, eye gouging rhetoric about me personally. That often says more about the degree of toxicity of the person attacking than me.

Which brings me to the last point I want to make: Are media trolls on social justice issues simply criticizing where marginalized people are wrong about an injustice? Again the difference between valid criticism and trolling is how personal vs. informative a response is. The degree and glee in unprovoked viciousness is another indicator of how much one really cares about the topic at hand. An example. from outside the community, I’ve even been media trolled by the likes of Ken Ham. He was attempting to derail criticism for him selling Young Earth Creationism to the largest  homeschooling conference in Texas. How do I know he wasn’t just criticizing me when he said I hated Biblical Christians, and called me intolerant, arrogant, ignorant, sanctimonious, etc.? Well the amount of that post devoted to attacking me personally  rather than addressing the problems with Creationism as science is one measure.  Another is his use of the disagreement to promote himself with little regard to the injustice of mis-educating children.

“This should make for good publicity for the Texas Homeschool conference I am speaking at August 1-3 this year.

It’s a good example of how atheists interpret ‘Freedom of Religion!’. A good illustration of their utter intolerance of those who hold views different to their anti-God religion of atheism.’

Ham also demonstrates another trait of a media troll. The lack of responsibility to do the mental work to understand what they set themselves up as an authority to criticize. I did choose to respond to Ham, because people need to be better informed about his attacks on science. Honestly, I don’t really care about what he thinks about me personally, simply because he arbitrarily insults anyone that disagrees with him anyways, even other Christians. Aron just had to block another Christian YouTube media troll, because every video he would post the most baseless, defamatory accusations simply to get people to click on his response video.

Predictably just like Kat says, a few people do click on his videos keeping the vicious circle going. And if you are the type of person, who has no interest in internet drama, and are still reading this; you were already ahead in the game by not playing it. Any sincere, ethical content creator can tell you how tired they are of media troll behavior. It is exactly like patiently trying to make evolution more understandable to people, only to have some self promoting, smug creationist, who obviously doesn’t know what they are talking about, come along and derail the thing. No argument no matter how well supported will change their mind; they have no intention to change their mind.

Is Ken Ham going to admit that humans are apes no matter how much evidence he sees, or even by looking in the mirror? It is not in his financial interest to do so. You can argue the definition of evolution with him till you’re blue in the face. Evolution is the change of allele frequencies over time. He will simply talk over you, and move the goal posts back to abiogenesis so that he can then claim life from non-life  makes evolution impossible. If he actually cared about science at all; he would put more effort into understanding it. More importantly he wouldn’t misrepresent it for attention and financial gain.

Creationists aren’t the only ones that hand-wave evidence; it happens all the time in social justice discussions.It’s like having third wave feminism mis-defined to be only about trivial matters when women are losing access to reproductive choices all over the country. Blocking access to safe and legal abortions here is already causing women to resort to unsafe, self-induced abortions here in Texas. That is a grave injustice where women are systematically and unfairly politically targeted for mainly religious, sexist reasons. Yet, there are a loads of people that routinely trivialize feminism, and are rewarded with attention. Most importantly, there are important discussions about equality where people’s lives and livelihoods are at stake that are often hijacked and derailed by media trolls.

That is the single most important difference between honest criticism and dishonest trolling, but particularly media trolling –how much the truth actually matters. 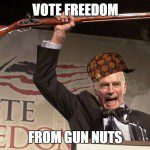 December 4, 2015
The Cowardice of the NRA and the Politicians They Own.
Next Post 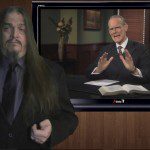 December 11, 2015 Indisputable Irrefutable Absolute Proof of God
Recent Comments
0 | Leave a Comment
Browse Our Archives
get the latest from
RA
Sign up for our newsletter
POPULAR AT PATHEOS Nonreligious
1