In a characteristic display of both irony and projection, Texas Governor Greg Abbott in a show of disrespect to the state’s nonbelievers ordered the Freedom From Religion Foundation’s holiday display removed from where it had been squirreled away on the basement floor for this reason:

“The Constitution does not require Texas to allow displays in its Capitol that violate general standards of decency and intentionally disrespect the beliefs and values of many of our fellow Texans,” Abbott wrote.

The display is offensive, doesn’t serve a public purpose and doesn’t educate anyone, he wrote.

“Far from promoting morals and the general welfare, the exhibit deliberately mocks Christians and Christianity,” said Abbott’s letter, which also called it a “juvenile parody.”

For more analysis of the Governor’s decision, FFRF’s own Andrew Seidel has a post detailing the decision.

Before I get into it over exactly who is disrespecting whose religious beliefs or the lack thereof; let’s compare displays:

It is nearly identical to this display that the Friendly Atheist reported was erected in Madison, Wisconsin. The Wisconsin display met with a different sort of poor sportsmanship when it was stolen during the Easter holiday season. Gov. Abbott described the Texas display as a “juvenile parody”.  The FFRF describes their intent as:

The Freedom From Religion Foundation, a Madison, Wisconsin-based nonprofit organization that describes itself as dedicated to promoting “the constitutional principle of separation of state and church, and to educate the public on matters relating to nontheism.”

Compared to what is allowed to be displayed in the Capitol building as reported on WWJTD:

It’s not even clear if the Governor has the right to order the display’s removal.

The display was originally permitted because it was sponsored by state Rep. Donna Howard, D-Austin. Howard said she found out about its removal Tuesday afternoon. “I was told by someone that the governor had ordered it be removed,” she said. The decision, she said, is disappointing, especially since many state leaders have raised concerns about freedom of religion and freedom of expression.

Most eligible Texas voters didn’t vote for him or anyone else for that matter.

According to the Elections Project, Texas sustained the nation’s second-lowest turnout rate of 28.5 percent, trailing only Indiana, which landed at 28 percent.

There are more than enough progressive votes to have elected his opponent Wendy Davis as 41 percent of Texas presidential votes went to President Obama. A total of 3,308,124 Texas voters voted for President Obama. In contrast, Gov. Abbott received 2,796,547 votes. So the old conventional wisdom that Texas has to put up with Christian dominionism, because this is a red state is wrong. We now have to put up with evangelical Christian co-opting of the government we all pay taxes for, because progressives don’t vote hard enough.

December 19, 2015
Refuting the allegedly irrefutable proof of God
Next Post 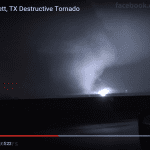 December 27, 2015 Texas weather has gone all "Texas" down here
Recent Comments
0 | Leave a Comment
Browse Our Archives
get the latest from
RA
Sign up for our newsletter
POPULAR AT PATHEOS Nonreligious
1