Texas weather has gone all “Texas” down here

Yes, Texas weather has gone plumb haywire, or “Texas” in Norwegian slang.  On the East side of Dallas,where Aron Ra and I live, secular relief efforts are underway from an estimated 11 tornadoes that tore through Dallas county and neighboring counties to the North and East. Tornadoes in December are rare, and the one that struck Garland where we live was classified as an “F4” leveling some houses to their foundations. The DFW area death toll is estimated at 11 people, and 600 structures were damaged. This tornado set a record for the most powerful tornado on record in Dallas County in December. Normally, Dallas is having winter weather at this time of year, but it was 80 degrees Fahrenheit. Meanwhile, the Texas Panhandle was experiencing a Blizzard Warning. The mixture of extreme temperatures produced tornadic weather.

Luckily for us, it struck 10 miles East of us, we still sheltered last night somewhere else while the super-cell was overhead. Tornado sirens were blaring and the rain was pouring making visibility poor.  Other area freethinkers were scrambling for cover. Amy Jo Hylkema was driving to an area party when she saw what was later described as a “Goliath” tornado emerge from the darkness.

Scariest night of my life. Chris and I are driving through storms to a birthday party in Rowlett. Heavy rain, low visibility. Suddenly, I see green lights in the sky popping off. The popping lights then reveal an enormous tornado in front of us. We pull into an overpass where several cars are parked and people screaming. Two men are helping everyone up into the underpass crevice. They pulled my full weight, my skin scraping the whole way up. At least 20 of us were huddled. Afraid for my life. The silver lining: in that moment, race, religion, economic status didn’t matter. People were helping people. Everyone wanted to live, and a few helped everyone to the other side.

This is a video  still taken of the tornado they saw:

The City of Rowlett is a disaster area, and has been declared a State of Emergency: 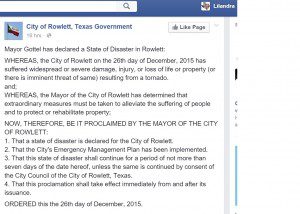 “While we don’t normally mount a drive for smaller disasters like this, we see an important need here to support the local secular response. Therefore, while we won’t be mounting an official FBB drive, we will provide an avenue for people to donate to help with the response and recovery. People can help by spreading the word as well as helping us identify possible beneficiaries for the funds. They must be local, secular, 501c3 organizations that are working in specific areas like animal shelters, food banks, or other groups that are directly responding to those affected. They can contact us at hdr@foundationbeyondbelief.org with suggestions.”

There is also a year end fundraiser where funds are being matched to $20,000 until January 15, 2016. *Update DFW’s Fellowship of Freethought a 501 c3 charity has made this announcement:

Relief efforts are underway, and FoF is putting out a call for supplies to help those whose lives have been impacted by the weather last night.

Brandy Madden and David Smalley of Dogma Debate have graciously offered their home to serve as a local collection point for donated supplies that will be distributed to those in need as soon as possible. 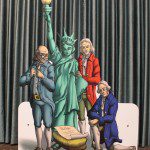 December 27, 2015 FBB fund against the Texas twister
Recent Comments
0 | Leave a Comment
Browse Our Archives
get the latest from
RA
Sign up for our newsletter
POPULAR AT PATHEOS Nonreligious
1