I have to agree with Bernie Sanders that I don’t give a damn about her damn emails, or Benghazi conspiracies either. This won’t be the type of post about some arcane conspiracy that an avid Alex Jones fan would obsess over.  Later, I will get to my concerns about Senator Bernie Sanders in the next post, so it won’t be a Clinton bashing party either.

Although I am a Sanders supporter, Clinton still has time to change my mind. I watch the presidential debates with questions in mind I’d like to see the answer to. It would be great if more Americans were politically engaged, because their lives and livelihoods are at stake in a realistic sense. I am as frustrated and discouraged about American politics as anyone else, but more informed voters will only make things better. The final Democratic debate before the Iowa Caucuses is tomorrow. It is being streamed live over NBC’s Youtube Channel.

In a way, all the candidates are interviewing for the most important job in America. So I feel as an American citizen, it’s only fair to hear the candidates including the Republicans out even though I self identify as Progressive. However, the GOP in their debates have been making this quite a chore. So far, they haven’t put forth a single convincing selling point. Their biggest point that they appear to be selling is fear.

To be fair, the Iraqi and Syrian Civil Wars and ISIS are scary things born out of a mixture of Islamist sectarian violence and G.W. Bush’s incompetent Gulf War foreign policy. Our country spent the lives of  4,486 American soldiers, sailors, marines, and airmen in a war ironically referred to as Operation Iraqi Freedom. About half a million Iraqi civilians also lost their lives from the start of Operation Iraqi Freedom in 2003. As an atheist, I have no reason to believe that innocent lives wasted are going to an eternal reward. Life is all the more precious to me. And today Iraq and the region are no freer. The region has actually become destabilized. The instability has created a breeding ground for virulent terrorist groups, which are a threat to the region foremost, but also to America and the rest of the world.

And Hillary Clinton voted for that war.

Clinton’s Support of Costly and Incompetently Managed Wars
This of course is one of my biggest concerns with her, especially as the secular parent of an adult son and a teen-aged son and daughter now that the draft is being discussed for women. We have an all volunteer military, but how many screwed up police actions are we from a draft? No one can say for sure. The 4,486 men and women that lost their lives as a result of this reckless war were someone’s sons, daughters, husbands, wives, sisters, etc. Not to mention the price tag of 1.7 trillion dollars.

What if we had spent that amount on the national debt, the bill we are leaving for our children to pay? What would that money have done in infrastructure like the 61,000 structurally unsafe bridges in the U.S.? How about the mostly GOP state led governments that have been consistently cutting education budgets to fund tax cuts? NASA? Cancer Research? Universal Healthcare including Family Planning? And in case you haven’t noticed the climate is changing, and we are grossly unprepared for the effects of that.

It’s not that I think that military interventions are never necessary; we live in a dangerous world. But that doesn’t mean that we can throw our sons and daughters lives away in a police action that actually made the world more dangerous. In her defense she said this:

“I made it very clear that I made a mistake, plain and simple. And I have written about it in my book, I have talked about it in the past,” Clinton told reporters at an event in Cedar Falls, Iowa, adding that “what we now see is a very different and very dangerous situation.”

Hindsight is 20/20, right? Sure, that was post-9/11, and Americans had the image of the Twin Towers falling burned into their memories. As a young mother then, I would have gladly agreed to any action that I thought would help keep my children safe. However, Operation Iraqi Freedom completely failed to do that, and exacerbated the problem. We can do better.

What I want to hear from Clinton on this point is what she would do better in solving the current ongoing problem in Syria and Iraq to stabilize the region. What also is her plan to keep the region stable in the years to come? Frankly, it’s not encouraging in the last debate that she would not involve Iran in a regional coalition to fight ISIS. She cited fear of a Shia triangle where Iran dominates the Middle East. (Sunni/Shia difference)The exact fear of a Shia Triangle was echoed by Sunni dominated Saudi Arabia according to a U.S. Embassy cable between Clinton and UAE Foreign Minister Sheikh Abdullah bin Zayed.

AbZ express concern over Saudi Arabia’s decision not to make a pledge at the Tokyo conference. AbZ said that the Saudis have never liked the Pakistan Peoples Party, and support Nawaz Sharif. In addition, AbZ posited that Saudi Arabia suspects that Zardari is Shia, thus creating Saudi concern of a Shia triangle in the region between Iran, the Maliki government in Iraq, and Pakistan under Zardari.

Hillary Clinton definitely has more foreign policy experience than any of the candidates of either party. Her hawkish stance on Iran and threats of military intervention are partly justified by Iran’s state sponsored terrorism, but much of the Wahhabism ideology that is inspiring global terrorism originates and is supported from inside Saudi Arabia. Her hawkish stance to Iran appears more in line with Saudi Arabia and Israel’s interests than our own.

ISIS ideology is a mutant of Sunni Wahhabism which originated in Saudi Arabia, and Saddam Hussein’s former Baathist Party which had former Soviet influence.

Whether the former Baathists adhere to the Islamic State’s ideology is a matter of debate. Hashim suspects many of them do not.

“One could still argue that it’s a tactical alliance,” he said. “A lot of these Baathists are not interested in ISIS running Iraq. They want to run Iraq. A lot of them view the jihadists with this Leninist mind-set that they’re useful idiots who we can use to rise to power.”

Terrorism is an evolving threat that needs to be understood in order to be properly addressed. There were smarter options before, during, and after the Gulf War, but what we got instead had no possibility of working.  Our policy leaders showed an unwillingness to do the necessary mental work to understand the region. Mainly conservatives have problems engaging with the problem meaningfully. They have a throwback gung ho attitude that is a throwback to the Cold War shaped by American Imperialism. Look at the bluster of the GOP candidates like Ben Carson comparing carpet bombing cities with civilians to surgery.

And too, there is this throwback all the way to the Old Testament that Israel is never wrong, because it is favored by the Biblical God. Clinton shares this rather uncritical attitude and unwavering support for Israel that doesn’t take into account how much Israel inflames the Palestinian issue. Her uncritical support of Israel would allow the United States to continue to be manipulated to pursue Israel’s agenda above our own safety and security.

Liberals are partly to be blame for our failed foreign policy in the Middle East too. There is a serious liberal discourse that we shouldn’t have tried to impose democracy on the Middle East. Iraq in particular needed more guidelines for democracy to work.  Specifically in order for democracy to work in Iraq there needed to be a strictly secular government. The Iraqi Constitution is an Islamic inspired document:

First: Islam is the official religion of the State and it is a fundamental source of legislation:

B. No law that contradicts the principles of democracy may be established.

C. No law that contradicts the rights and basic freedoms stipulated in this constitution may be established.

Second: This Constitution guarantees the Islamic identity of the majority of the Iraqi people and guarantees the full religious rights of all individuals to freedom of religious belief and practice such as Christians, Yazedis, and Mandi Sabeans.

Although their Constitution supposedly guarantees full religious rights of specific religious minorities, (atheists not guaranteed rights of course) in practice the Shia dominated government persecuted the Sunnis. Many of these Sunnis especially former Baathists later helped form the Islamic State. There needed to be a Judicial branch monitored by the United Nations, that addressed human rights abuses by the Shia led government. Abuses such as holding the women relatives of suspected enemies of the Shia government without charges without access to speedy trial. All of the rights we as Americans are guaranteed by the Bill of Rights could have been implemented in Iraq. If sectarian partisanship had been too much of an obstacle to guarantee human rights than Iraq could have been split into Northern and Southern Iraq at least until the former Baathists had died out.

Despite her foreign policy experience, Clinton has been in a position as Secretary of State to implement policy reforms in Iraq that take into full account the ethnic, tribal, and sectarian issues that have long been ignored by policies formed during Western Imperialism. If she can better adapt to these and come up with a more realistic plan of restoring stability to the Middle East, I would be more confident to vote for her in the primaries.

Her foreign policy isn’t the only concern that gives me pause. There are a number of other issues that were popular at the time that she was on the wrong side of history of such as marriage equality and mass incarceration. In a way, all of these issues speak to a lack of vision to lead the country in the right direction despite whatever the popular nonsense is that is blowing us off course. Regular Americans like me have to do the mental work democracy requires to choose the right leader. How much more so is required for those who petition us to lead us? 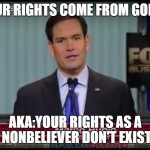 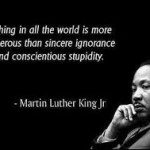 January 18, 2016 MLK: This quote is still true today
Recent Comments
0 | Leave a Comment
Browse Our Archives
get the latest from
RA
Sign up for our newsletter
POPULAR AT PATHEOS Nonreligious
1