Although you can’t officially salute them yet because they are trainees, you can unofficially salute the Military Association of Atheists and Freethinkers.  The group just hosted a meeting of a possible world record 270 Airmen recruits based in the San Antonio area. They discussed where atheists get their morals from, which every atheist knows is from the reality of living in society and empathy.

As if anyone needs proof that atheists are moral, this group just helped  Atheists and Humanists Helping the Homeless-San Antonio and South Texas Atheists for Reason distribute items to San Antonio’s homeless. It is always great to write about the good people of Texas, because the politicians here sometimes embarrass us. 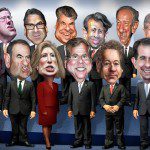 February 6, 2016
Making it through the GOP Debates
Next Post

February 12, 2016 Darwin Day in Wisconsin
Recent Comments
0 | Leave a Comment
""No one despairs the mercy from his Lord except the people who are lost."so basically ..."
ichthyic An Infidel Reads Sūrah 28
"And what's your proof that no philosopher is against impractically reducing reality into gibberish? What's ..."
Héctor Herrera Philisophical empiricism vs metaphysical solipsism
"" If you’re going to re-make or revise a classic, at least try to make ..."
ichthyic An Infidel Reads Sūrah 17
"https://medium.com/@godless... https://uploads.disquscdn.c..."
Godless An Infidel Reads Sūrah 17
Browse Our Archives
get the latest from
RA
Sign up for our newsletter
POPULAR AT PATHEOS Nonreligious
1