Three reasons not to raise your child to fear any god

Three reasons not to raise your child to fear any god February 16, 2016 Lilandra Ra

There are a great many Christians who use the Bible for parenting guidance. As a former Christian, I did when my children were very young. If there is one piece of good advice on parenting (though it isn’t meant that way) in the Bible, it is this:

Thanks to Donald Trump, I now read that as One Corinthians. But seriously, after I deconverted 8 years ago and thought it through, I no longer consider the Bible to be an authority on raising children. So when an anonymous YouTube commenter suggested this about my son on a science education video he made with his stepdad Aron Ra, it sounded a bit childish.

The variety of different verses in the Bible in their advice make this sound like a genuine Christian. However, it could be a troll, but I never consider it a waste of time to address a possible troll if the topic itself is informative. So for you, Anonymous Internet Advice Giver, here are a few reasons it is not a good idea to raise your child to fear any god.

1. It’s never justified for a parent to instill fear of a justified authority.

Would anyone ever knowingly instill fear in a child of a just authority like a doctor?  I know people who are afraid of surgery. One woke up under anesthesia during a tonsillectomy as a child, and to this day, they have lasting anxiety about surgery. Yet parents want to instill fear of their god’s authority into a child. What kind of just authority would want a child to fear them? Make no mistake about it the Bible god asks repeatedly to be feared, as this commenter’s advice for Aron to raise his child in “Fear of the Lord” demonstrates. Here is a comprehensive list that is compiled by a god-fearing Christian of verses that instruct people to fear the Biblical god. Tellingly this verse is first:

22:12 “Do not lay a hand on the boy,” he said. “Do not do anything to him. Now I know that you fear God, because you have not withheld from me your son, your only son.”

According to the story, Abraham was asked to sacrifice his son in order to prove that he feared god. I can’t think of any authority worth following that would ask me to murder my own child. This story if it happened today, the parent would be imprisoned for attempted murder.

2. It could leave lasting emotional scars.

As the child of divorced parents, I was raised to fear both the Southern Baptist and the Catholic god. It wasn’t just the fear of the fire and brimstone either. Although, that made me anxious all the days I was a Christian because the Bible is arbitrary about what it considers abominable. Everything from homosexuality to shellfish was considered abominable. It also says that some people would be turned away by Jesus because their name was not in the book.  No Christian can honestly say they know that they are going to Heaven. Also, if you honestly believe what the Bible says there a number of things that would scare children if they were real. The story of Jesus healing a man possessed by demons terrified me as a child. Sure the part about there being actual demons is scary. However, when I considered that Jesus told people that god allowed this person, who he said was innocent, to be possessed by demons simply for the glory of god that terrified me.

3. It’s never a good idea to instill fear in a child over something you can’t prove exists.

Looking back on it now as a non-believer, I could have done without the unnecessary fear of the Biblical god, and grown up just fine. I would have to say I would have been better off without it. Especially since there is no discernible evidence that the Biblical god exists. People would consider me a horrible parent if I raised my children to fear Odin, who sometimes does scary things to people too. How about people, who still fear the mischief of fairies? Don’t parents still half seriously raise their children to fear to be on Santa’s naughty list? That’s considered more humane than to raise them with the traditional fear of being taken to the Christian Hell by Krampus.

How about we stop instilling fear in children with stories altogether? Every parent knows life is hard enough. If Jesus and his Father were real they would do well to follow his own advice:

The verse goes on to say this:

Any god worth worshiping would give good gifts to children. They wouldn’t, for example, send bears to kill children for teasing a bald prophet. If a parent would not choose to knowingly instill fear in their children of bodily harm, why would they instill fear of a god that would cause them eternal bodily harm? Why give them a snake when they trust you to nurture them?

[Image “Greetings from the Krampus!” Wikimedia] 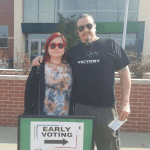 February 19, 2016 We voted for Bernie
Recent Comments
0 | Leave a Comment
"And what's your proof that no philosopher is against impractically reducing reality into gibberish? What's ..."
Héctor Herrera Philisophical empiricism vs metaphysical solipsism
"" If you’re going to re-make or revise a classic, at least try to make ..."
ichthyic An Infidel Reads Sūrah 17
"https://medium.com/@godless... https://uploads.disquscdn.c..."
Godless An Infidel Reads Sūrah 17
"Many years ago I was given a copy of Darryl Huff's "how to Lie with ..."
Steampunk Gentleman Presidential poll: Heads I win, tails ..."
Browse Our Archives
get the latest from
RA
Sign up for our newsletter
POPULAR AT PATHEOS Nonreligious
1