How can reasonable people discuss racial justice? Any secular group that focuses on people of color often gets ironic criticism for being exclusive. Though in my experience with American groups, I don’t know of any secular group that disallows whites from joining. As a biracial Asian-American, I have always been there doing my small part to help increase understanding of race issues in the movement. I have participated in discussions like during the Secular Social Justice Conference where some of the people have expressed how tired they are of persuading and educating white allies. 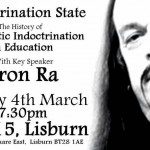 March 11, 2016 Freethought Friday ep303
Recent Comments
0 | Leave a Comment
""No one despairs the mercy from his Lord except the people who are lost."so basically ..."
ichthyic An Infidel Reads Sūrah 28
"And what's your proof that no philosopher is against impractically reducing reality into gibberish? What's ..."
Héctor Herrera Philisophical empiricism vs metaphysical solipsism
"" If you’re going to re-make or revise a classic, at least try to make ..."
ichthyic An Infidel Reads Sūrah 17
"https://medium.com/@godless... https://uploads.disquscdn.c..."
Godless An Infidel Reads Sūrah 17
Browse Our Archives
get the latest from
RA
Sign up for our newsletter
POPULAR AT PATHEOS Nonreligious
1