House Democrats in Seventh Hour of Sit In over Gun Legislation

In the wake, of the largest mass shooting in American history in Orlando that caused the death of 49 LGBTQ Lantinx Americans, House Republicans staunchly refuse to even bring proposed gun legislation to a vote. In this election season, it is all too convenient to not have your name attached to a no vote on not doing anything about keeping guns out of the hands of dangerous people yet again.

House Democrats are in the 7th hour of a sit in on the House floor. They have had the microphone and cameras shut off.

“Our people deserve to know where their representatives stand on this issue, just as they now do with their senators,” he said. “Led by civil rights hero Rep. John Lewis, we will be sitting-in until the House is allowed an opportunity to vote. This is an issue that ought to transcend party — it’s about saving lives and keeping our communities safe.”

Both parties are definitely not the same on sensible gun legislation.

I have asked the question before if America is tired enough of mass shootings to do something about it. This is a blog that advocates reason, but there are a lot of people, who call themselves reasonable, who dogmatically oppose even the most sensible gun legislation. They are in the way as much as the Tea Party cranks in the GOP and their financial supporters in the National Rifleman’s Association.

The answer to the question of when people are tired enough of the killing to take action is: when people stop allowing the GOP to scare them into voting against their own best interests. I have kids and I don’t want to raise them in a country where money counts more than their lives.

*Update If you would like to see what the GOP doesn’t want you to see. The GOP killed the cameras, but C-Span is managing to get a feed from a “periscope” of one of the congressman. 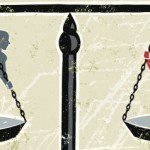 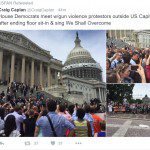 June 23, 2016 House Democrat Sit In Comes to an End Now What?
Recent Comments
0 | Leave a Comment
Browse Our Archives
get the latest from
RA
Sign up for our newsletter
POPULAR AT PATHEOS Nonreligious
1