Good News from the Supreme Court for those in need of an abortion. The Daily Beast reports the Supreme Court in a decisive 5 to 3 ruling has struck down Texas’s HB2 that enacted Targeted Restriction of Abortion Providers or TRAP laws.

In Texas had the decision been upheld it would have shuttered most of the abortion clinics and left women in the Rio Grande Valley without a safe, legal abortion provider as far as San Antonio as no regional hospital would grant admitting privileges there.

“We conclude that neither of these provisions offers medical benefits sufficient to justify the burdens upon access that each imposes,” Justice Bryer wrote in the majority opinion. “Each places a substantial obstacle in the path of women seeking a previability abortion, each constitutes an undue burden on abortion access.”

Justice Clarence Thomas predictably whinged about the decision in a minority opinion:

Texas TRAP laws were particularly onerous due to the size of the state.  It remains to be seen what will be done about similar TRAP laws in other states. They should be thrown out as unconstitutional. 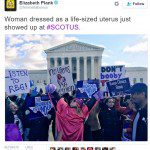 June 24, 2016
SCOTUS to rule soon on undue burden on abortion clinics
Next Post 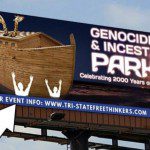 June 30, 2016 We're protesting Ken Ham's Ark Park
Recent Comments
0 | Leave a Comment
"" If you’re going to re-make or revise a classic, at least try to make ..."
ichthyic An Infidel Reads Sūrah 17
"https://medium.com/@godless... https://uploads.disquscdn.c..."
Godless An Infidel Reads Sūrah 17
"Many years ago I was given a copy of Darryl Huff's "how to Lie with ..."
Steampunk Gentleman Presidential poll: Heads I win, tails ..."
"That cactus like plant, the Euphorbia abyssinica is quite an amazing sight. I saw the ..."
John Thimakis An Infidel Reads Sūrah 17
Browse Our Archives
get the latest from
RA
Sign up for our newsletter
POPULAR AT PATHEOS Nonreligious
1