Many of us don’t want to believe it has come down to Trump Vs. Clinton but here we are making the best of it. A new feature thanks to the plucky folks at Bloomberg TV is live fact checking! So you aren’t watching with that nagging voice in the back of your head that tells you, “Hey wait a minute that’s not true!” And let’s be realistic that would have been quite distracting watching tonight’s debate.

Also, maybe not the greatest drinking game strategy if you did that every time presidential contender (Gah!) Trump lies.

One of my friends may be half serious when he proposed this strategy.

Debate drinking game: drink until you pass out about half hour before debate. That’s it.

On the pro side, it could spare you a face palm headache. However, the Ra family is watching and live tweeting anyways because that’s what patriotism should be. Rather than being forced to recite a Pledge repeatedly without much critical thought, people should dump the motto “My Country Right or Wrong.” If you want a country to be proud of then you should criticize it when it is wrong. 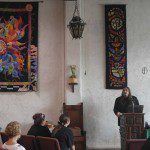 October 4, 2016 Which is worse? Lying to children? Or being truthful with them?
Recent Comments
0 | Leave a Comment
"Great article! Very rational."
Christopher Harper Debate: Is Christianity dangerous?
""No one despairs the mercy from his Lord except the people who are lost."so basically ..."
ichthyic An Infidel Reads Sūrah 28
"And what's your proof that no philosopher is against impractically reducing reality into gibberish? What's ..."
Héctor Herrera Philisophical empiricism vs metaphysical solipsism
"" If you’re going to re-make or revise a classic, at least try to make ..."
ichthyic An Infidel Reads Sūrah 17
Browse Our Archives
get the latest from
RA
Sign up for our newsletter
POPULAR AT PATHEOS Nonreligious
1