Can you say President Trump?

Texas has cast their deciding electoral votes for our next President (Are you ready?) Donald J. Trump! What now if you took the obvious hints both pre and post election that this was most definitely not a good idea?

First for people that voted for Trump celebrate or regret your folly. Trump overtly promises to be a disaster for not just the brown people that he bashed that overwhelmingly rejected him –but for everyone including you!

On the environment, we all get Rick Perry for Energy Secretary. Link to Physicist Lawrence Krauss to educate yourself about why that is a bad idea. Realistically, there are at the best case scenario 27,000 deaths a year that will occur from the millions who will lose coverage they have now through Obamacare.

Like a blockhead that kicks a hornet’s nest in their neighbor’s yard don’t be surprised when you get stung as well. There was from the beginning ample evidence not to cut your nose off to spite your face –intentionally or not.

However, there is a diehard enough group that will not believe anything but Right Wing propaganda. They may take their beliefs to the grave.

Hopefully, in this fact resistant group, there will be some with the good sense to change their minds once they start feeling the pain. Unfortunately, there are no immediate democratic remedies to undo a bad decision at the presidential polls. No Superman in the Electoral College to swoop in and save us from ourselves.

For the rest of us that value reason, welcome to the resistance. There is room for repentant Trump supporters. We can find strength in being on the side of love. Love has overpowered hate in the past. Like the camaraderie with Native Americans at Standing Rock. People standing together and supporting their fellow Americans won the day.

Love without action is a platitude on a greeting card. Nor should we love like fools and meekly stand by as Trump and his hateful followers hurt America. There has to be more than lip service. There has to be a reckoning.

I put together a video of times love triumphed over hate to song lyrics. The song is about being remembered for how you loved. It’s called “How did you love? Trump”.  I made this video as part of a presentation I was asked to do for Humanists of Houston.

No one celebrates historical hateful figures. It’s Trump’s choice how he is remembered. 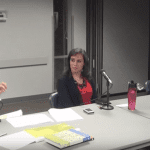 December 25, 2016 My debate with Subboor Ahmad
Recent Comments
0 | Leave a Comment
Browse Our Archives
get the latest from
RA
Sign up for our newsletter
POPULAR AT PATHEOS Nonreligious
1