And so it begins.

Donald Trump enters his new office with the lowest initial approval rating of any president in living memory. Yet despite these already impressive figures, I predict that his numbers will actually go even further down—before it’s all over. That, I think, is an appropriate way to end that sentence. 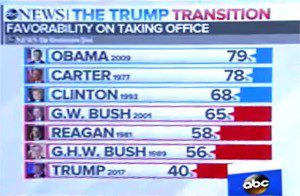 Trump promises—albeit unwittingly—to undermine the Constitution and the environment, the economy, and anything else he can bring to ruin. That’s why he wants to eliminate the Environmental Protection Agency along with Native American treaty lands. This is how he says he will “make America great again”. He says he will do that, but he clearly does not intend to. Instead he’s going to impede or reverse women’s rights and civil rights, reverse progress everywhere else, and expand the fossil fuel industry while dismantling every sane provision erected against such lunacy. I try not to think about what’s going to happen to foreign policy.

Personally I think this is the worst situation the United States has ever been in. We didn’t have four years to allow this madman to run amok with his denial of science and other realities. He refuses intelligence briefings because he thinks he doesn’t need intelligence. His delusion thrives on ignorance and the impression of self-importance known as the Dunning-Kruger effect. So his cabinet choices are all the worst foxes to put in each chicken coop, anti-humanitarian, anti-education creationist ideologues all. They’re not just authoritarians pushing for theocracy; they’re also a virtual plutocracy, possessing more wealth themselves than a third of America’s households combined. Their goal is to eliminate the middle-class, to divide the have’s from the have-nots, to make the rich richer at everyone else’s expense, and to Hell with y’all and everyone else.

It is exactly the opposite of everything we Sanders supporters hoped for a year ago. That’s why Trump’s entire cabinet is against the Department of Education too: they don’t want you to know any better.

Already our now all-Republican dominated government has voted to strip away our healthcare, refusing to protect those with pre-existing conditions. They’re determined to eliminate the Affordable Care Act and the Children’s Health Insurance Program as well as Medicaid and Social Security. Of course they cut contraceptive coverage too, and they won’t allow young adults to stay on their parents plan either, and they’ve only continued their now established tradition of denying the medical care they promised to our veterans as well.

That was before the inauguration, which was attended by a crowd of only 1/8 the size that turned out for Obama. Admittedly Obama promised “change we can believe in”, and I don’t believe there’s been that much change. But now we’re hoping that Trump won’t or can’t change very much himself. How could he not? We already know that everything he wants to do will just fuck up everything for everyone everywhere. So his election prompted riots in the streets all over the country, and his first day in office was met with the biggest protest in American history. Nearly three million people, roughly the same number as the surplus of the majority who voted against him marched against him by the tens or hundreds of thousands per city in dozens of cities all across the country. And it wasn’t just in this country! Many thousands more amassed in several other countries around the globe, both to promote women’s rights, and also to protest Trump, one of the most obviously incompetent and famously misogynist officials of any non-Shariah state.

His response? To criticize the media in yet another attack against the first amendment. But I was one of those millions of people to participate in these marches and who know that this isn’t just something the media made up. Trump’s unassailable narcissism even in the face of global protest will not let him admit that he is not an honest or likeable person by most accounts.

On his first day in office,  pages pertaining to LGBT, climate change, health care, and civil liberties were removed from the White House website, which is consistent with what was expected, and was taken as an implication of things to come. Immediately after that, Trump broke 34 promises. Fortunately most of them weren’t just what he shamelessly admitted were lies to promote his campaign; many of them were dangerously stupid things he shouldn’t have done anyway. He also again threatened immigrants and lied on Twitter and reprimanded his own staff for being truthful on social media. And as always, whether directly or indirectly, intentionally or not, he and his administration threaten to do much worse every day from here on. Did we forget that he and his staff have repeatedly commented or asked why we have nuclear weapons if we don’t intend to use them? This is also the guy who wants to ramp up our nuclear defense system long after the cold war is over.

And yet there are still people who say that Hillary would have been just as bad, if not worse. No, while I did not consider Hillary to be a good candidate, she was certainly a better one. She has also shown again and again that she can, and occasionally will, change positions according to public demand. Call her evil if you like, but she was definitely the lesser evil. At least she could be reasoned with. Trump can’t even be advised.

Now, I’m normally quite optimistic about most things most of the time. But there is no way I can be now. My opinion is that Nixon was evil but not stupid. Bush was stupid but not evil. But it seems the Trump administration is both stupid and evil. Trump’s only possible term as president started out very badly, and I fear it will only get a lot worse for everyone before it also ends badly: which one way or another will probably be sooner than expected. Impeachment seems inevitable eventually. Were Trump not such a completely oblivious egomaniacal megalomaniac, then he should see that as his second best option out of all possible outcomes of this course, and that having no capacity to achieve anything better than that, he should resign. 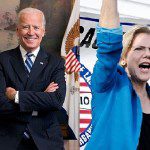 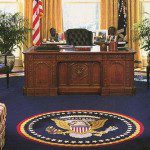 January 23, 2017 Just give him a chance...
Recent Comments
0 | Leave a Comment
"" If you’re going to re-make or revise a classic, at least try to make ..."
ichthyic An Infidel Reads Sūrah 17
"https://medium.com/@godless... https://uploads.disquscdn.c..."
Godless An Infidel Reads Sūrah 17
"Many years ago I was given a copy of Darryl Huff's "how to Lie with ..."
Steampunk Gentleman Presidential poll: Heads I win, tails ..."
"That cactus like plant, the Euphorbia abyssinica is quite an amazing sight. I saw the ..."
John Thimakis An Infidel Reads Sūrah 17
Browse Our Archives
get the latest from
RA
Sign up for our newsletter
POPULAR AT PATHEOS Nonreligious
1