I’m testifying at the State Capitol

A couple weeks ago, my wife, Lilandra and I once again testified before the Texas State Board of Education. They were still considering including language in the science standards that was designed to undermine teaching of evolution. This language would have encouraged ignorant teachers to cite anti-science apologetics instead of teaching anyone what the theory is or the evidence for it. Lilandra and I testified in opposition to an overwhelming collection of creationists, but we were pleasantly surprised that the SBoE actually voted not to include such language, and to simply teach the scientific consensus without apology.

However, I’ve just found out that yet another right-wing religious Republican representative is pushing House Bill 1485 to override the SBoE and allow creationist teachers to lie to their students instead of teaching them. As usual, the Texas Freedom Network, who I interviewed last week has sounded the alert. So I’ll be back in Austin tomorrow to testify again, this time before the House of Representatives in room E2.036 of the State Capitol.

April 26, 2017
San Antonio's Non-Christian Scapegoating Mayor is up for Re-election
Next Post 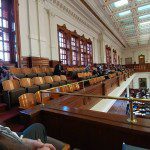 May 4, 2017 Legislators want "academic freedom" to lie to students
Recent Comments
0 | Leave a Comment
Browse Our Archives
Follow Us!