On the 67th episode of the Ra-Men, I interviewed Prof Gleb Tsipursky PhD regarding a project he co-founded and which I find personally intriguing. I asked Dr Tsipursky to write a blurb for this podcast, and this is what he shared with me:

We will talk about the Pro-Truth Pledge, whose purpose is to reverse the tide of lies in our politics. It does so by changing the incentive structure for public figures, establishing rewards for truth-oriented activities and penalties for sharing misinformation, as informed by behavioral science research. It targets politicians and other public figures, with the intent of committing them to spreading accurate information. Another goal is to get ordinary citizens to take the pledge, and advocate for others and especially public figures to sign the pledge, as well as monitor them for violations. This pledge is part of the broader Rational Politics project at the nonprofit organization Intentional Insights, which gathers reason-oriented citizens of all political stripes devoted to spreading rational thinking and wise decision-making in the political arena. To address this fundamental issue, we aim to use best practices in communicating and marketing to convey to the citizenry the vital role of evaluating reality accurately using research-based methods.

In this conversation, we will talk about:

Bio: I serve as the volunteer President of Intentional Insights and helped author the Pro-Truth Pledge, and my research as a professor at Ohio State in the Decision Sciences Collaborative and History Department on decision-making and emotional and social intelligence informs my activism. I appear regularly on network TV, such as affiliates of ABC and Fox; radio stations such as NPR, WBAI (New York City), KGO (San Francisco), 700WLW (Cincinnati) Sunny 95 (Columbus), KLRD (Dallas), WNYU (New York City), AM980 (Canada), and others; as well as internet-only media such as podcasts and videocasts. I also write for reason-oriented venues such as Skeptical Inquirer, The Humanist, Free Inquiry, Secular World, Patheos, American Atheist Magazine, The Orbit, Skeptic Examiner, Religious Humanism, Secular Nation, Essays in the Philosophy of Humanism, The Human Prospect, and others. An Amazon best-selling author, I wrote several academic and popular books, and am most well-known for Find Your Purpose Using Science. My next book, The Alternative to Alternative Facts: Fighting Post-Truth Politics With Behavioral Science, is coming out in early 2018. My pieces frequently appear in mainstream venues like Time, Psychology Today, The Conversation, Salon, Lead Change Group, Lifehack, Elite Daily, The Huffington Post and elsewhere. I am also a speaker on these topics, and am available to speak to reason-oriented groups through the AHA, SSA, and CFI Speakers’ Bureaus. My fuller bio is here.

Please be aware there is a break in the video from 29:49 to 35:48. I tried to download the video and edit it back together, but my system says the file is corrupt and can’t be corrected with my software. So since it somehow plays this way, I’ll just have to leave it as it is.

I offer apologies to my friend, Ashley Paramore, also known as Healthy Addict on YouTube.  I had a brain-fart “senior moment” where I somehow could not remember her name at that instant. I dunno what was wrong with me. :-)

As you can see on my campaign website, I took the Pro-Truth Pledge. As a full-time political activist advocating science education against stiff and overwhelming opposition at every level of government, I have often demanded that we have some way to hold politicians accountable for the factless falsehoods and bigotry and lack of integrity, morality, or decency that some of them commonly espouse. Now that I’m running for political office as well, I insist that others be held to the same standards and code of honor that I adhere to myself. Please hold me accountable. 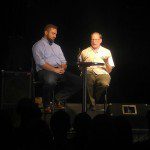 Exposed: the evangelist who was assaulted...
The Freethinker
Related posts from RA