Texas tackles Moses and the Bible in History Standards Again

Should Texas students be told that Moses and Judeo-Christian Biblical Law influenced the founding of our laws? According to the Texas Freedom Network, the Texas School Board will be hearing testimony on this on Tuesday, June 12th, and some other culture war questions that politicize history such as:

As a Thomas B. Fordham Institute recent review of Texas Essential Knowledge and Skills points out:

Board member David Bradley, R-Beaumont, even argued during the TEKS debate that separation of church and state is not a key constitutional principle:

“I reject the notion by the left of a constitutional separation of church and state. I have $1,000 for the charity of your choice if you can find it in the Constitution.”

How about David Bradley finding a mention of Moses in the Constitution?

Texas School Board review teams worked through the standards and suggested deleting mentions of Moses because of a concern of “bias”:

The team also cited Moses being “too removed” from the time period of the Constitution and “beyond the time scope.” They also suggested removing Judeo Christian and Biblical laws as having “informed the American founding.”

Another question for the board:
Is the U.S. a theocracy or a monarchy like the form of government in the Bible?

Is teaching the truth to children important?

On Tuesday, Aron and I will ask some of these questions and more. If you want to join us, you have to register online. If you can’t make it join and support the Texas Freedom Network and share this post. 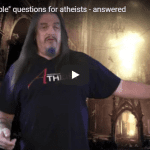 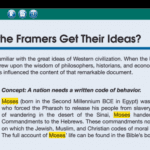 June 18, 2018 "Truth" in Texas Textbooks
Recent Comments
0 | Leave a Comment
Browse Our Archives
get the latest updates from
RA
and the Patheos
Nonreligious
Channel
POPULAR AT PATHEOS Nonreligious
1

Intentional Ministries: When Congregations Are Pastors'...
Roll to Disbelieve
Related posts from RA