In No God We Trust

Even in Texas, the bigger cities tend to be less traditional than most rural communities, especially Austin, Houston and Dallas, which are actually quite forward-thinking, at least for Texas. But Fort Worth is one of the most overtly religiously conservative urban areas. So there was quite a reaction when Metroplex Atheists hung a bunch of banners all over downtown Main Street saying, “In No God We Trust”.

Not surprisingly, the reaction to this was an immediate uproar. I mean, any American city—no matter how progressive—would probably react starkly, but we’re not talking about Los Angeles; this is Fort Worth! They take God and country very seriously there, and Metroplex Atheists is attacking the national motto!

Well, to be fair, “In God We Trust” wasn’t always our National Motto. Originally, the Founders of this nation envisioned a multicultural “melting pot”; wherein refugees of all nationalities could flee religious persecution in their homelands and escape to the first ever secular nation, where whatever you believed—or not— should have no influence over your status as a citizen of this country. It was a Democratic Republic based on the idea of equality, which was at least intended to be regardless of ethnicity or creed. So the founding fathers, being heavily influenced by Greco-Roman Democracy and philosophy, conceived the original motto, E Pluribus Unum, “out of many, one”.

This admirably inclusive and noble sentiment was the national motto that my parents grew up with. It held from the beginning of these once-United States in the late 1770s, all the way until the McCarthy era of paranoid suspicion and fear of Communists during the “red scare”. In an opposing reaction to what was seen as a “godless” enemy threat, the motto was changed to “In God We Trust” in 1956.

It was policy change that would have greatly annoyed the Founding Fathers, who insisted that the United States was “not in any sense founded on the Christian religion”, nor specifically on any covenant with God or belief in Moses. A secular nation—a government with no declared faith of it’s own—is the only kind that even can provide religious freedom, and this one did, promising to make no law even respecting an establishment of a state religion, nor prohibiting the free exercise of any varied faith either.

But now, religious groups are using that misapplied motto as part of their propaganda that America was founded as a Christian nation, an assertion that every secularist knows and can prove to be false. But that demonstrable truth doesn’t matter to those who would rather believe something else. Pastor Robert Jeffress of First Baptist Church in Dallas, who has the laughably tragic title of “spiritual adviser to the president”, even advocates putting the new motto’s religious declaration atop every school and government building.

The new motto was never appropriate for this country. It is divisive, exclusionary, and clashes with the original idea of inclusive equality; especially given that the atheist perspective on religion is the fastest-growing demographic in all fifty states. We already outnumbered Catholics years ago, and now there are more of irreligious unbelievers than even Protestant Christians in this country. Nearly a third of our populace, roughly a hundred million people actually do not trust—or believe—in any god or religion. So it’s time our position was recognized as significant rather than being demonized or dismissed, which is the effect that our current motto has.

Which is why I gotta give credit to Fort Worth Mayor Betsy Price, who said that even though she was “appalled” by the banners, and does not support or agree with their message, she still said, “We must respect freedom of speech” and that “we must remember that many Americans have fought and died for the freedoms we cherish today.”

Metroplex Atheists is hosting an Educational Seminar at the Fort Worth Botanical Gardens on July 14th from 3:00 to 5:00 pm. Speakers include myself and Courtney Stewart, President of Metroplex Atheists, representing over 1,500 area infidels concerned about attempts to Christianize our once secular nation. 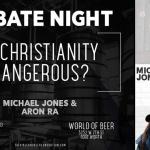