Someone sent me the following image on social media, and I just couldn’t resist the opportunity to crash this church service. 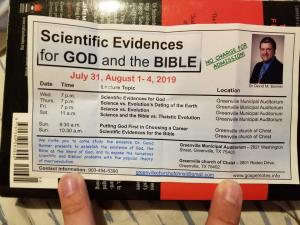 I looked into it and someone else quickly shared a link to the very seminar that this guy has been repeating all over the country for years now. I listened to it and realized immediately that he is actually the least competent of all the semi-professional creationists I’ve ever encountered, and that’s saying something! Remember that I’ve already debated Kent Hovind! So it’s hard for the derp of science denial to even impress me anymore. This new guy’s errors were all so basic that I thought I would have a good time and maybe at least get some good video out of it.

Someone warned me that if I go, I might be recognized and stopped at the door, but I’m not that famous. I figured I could just blend in. So I put on a hair glove and a skull cap and rode my motorcycle 40 miles east to the Greenville Texas Municipal Building to hear Dr David Bonner give his “scientific evidence for God”.

I don’t think I blended in as well as I had hoped. In fact, as I was sitting in one of the theater seats, one of the old church geezers leaned in close to inspect my eyes, apparently trying to tell if I was stoned.

I arrived with a back pack full of camera gear and the lofty idea of recording a conversation with the presenter after the presentation. But I quickly found out there would be no Q&A, like there is at every one of my public appearances. Instead, they forbid anyone from recording video even on cell phones anywhere on the premises, even though it was a public building. So there would be no opportunity for his audience to find out how their speaker had just lied to them, which is a travesty of justice. Plus it would be a completely wasted trip for me.

I just wanted to get the speaker on video learning why the things he was saying were wrong. Since that wasn’t allowed, he can still pretend to have plausible deniability. He’s been doing this exact same seminar verbatim for too long to even consider correcting it just because he was proven false on every point as a matter of public record, but he still wasn’t going to let that become public record.

Bonner is just a dentist, though he began his presentation professing to having specialized in evolutionary biology. He even said that he taught it at some university. Yet he revealed that he has no idea what evolution even is, nor what a theory is either. He resorted to the 6th foundational falsehood of creationism by pretending that all scientific theories of origins are under the same religious umbrella of “evolutionism”. Actually he called it “Darwin’s organic evolution”. He also recited the 12th foundational falsehood of creationism by saying that evolution was just a theory, not a fact.

I could go on and on of course, but I doubt there would be much entertainment value in reading the text with no video to show the action objectively. So I will just concentrate on his “scientific evidence for God”.

Here it is. Ready?

Premise 1: According to the first law of thermodynamics, matter can neither be created or destroyed. You’d think that should disprove his god right away, but not when you believe in magic and the logical fallacy of special pleading.

Premise 2: Matter cannot exist forever. I don’t know why he said that. He just did. I guess it doesn’t matter that it contradicts his first premise. He also said that no scientist would ever say that matter could be eternal, even though I personally know at least one famous physicist, Sean Carroll, who has already said that the universe is eternal

Conclusion : So something must exist eternally. He didn’t explain why he jumped to this non-sequitur based on his earlier contradiction. But he further assumed that this eternal something must be spiritual, because he mistakenly thinks that matter can’t be eternal, even though it also can’t be created or destroyed. And all of that illogic, [he says] proves the existence of God, at least if you subscribe to the same type of question-begging fallacy that he does.

So that’s his proof for God. Were you convinced?

He went on to say that there were only three ways one could be atheist. (1) is to assume that reality is not really real. Those who know me already know how often I complain that it is believers who constantly question whether reality is real, where I have to take it as real by definition.

He said the second way to be atheist was to believe that everything came from nothing. Yet I don’t know any atheist alive who believes that. Not even Lawrence Krauss believes that. Krauss wrote “A Universe From Nothing”, but he also says that an absolute nothing is not really possible; partly because even a quantum vacuum has subatomic particles popping in and out of it.

Dr Bonner said the third way to be atheist was to believe in Spontaneous Generation. He then demonstrated that he didn’t have the first clue what that Spontaneous Generation even is, because he said that too was living things popping into existence out of nothing; you know, like what creationists believe God did.

So none of the atheists I know have ever made any of these three assumptions. For us the issue really is that there simply is no truth to the unsupported assertions that we always hear from believers, and this is no exception. I’m always complaining about how believers present misrepresented misinformation or empty claims of impossible absurdity as if it was fact, while also pretending to know things no one even can know. This guy says he knows for a fact that God exists, which is awkward because I know far more defensibly that God does NOT exist. He was also claiming to have proven the existence of God through logical fallacies, while also reporting things he said science has never seen but which I know (and can show) actually has been observed and documented numerous times.

But what is most maddening to me about that encounter was the minister interceding so that I could not address the speaker. Instead I found myself arguing with someone who clearly did not know what the truth is. More importantly, he obviously didn’t want to know it either. I will never understand people who still want to believe in lies even after they know how and why it’s wrong. Why should anyone not want to understand the way things really are? Why would I want to make-believe something else instead? Every time I walk out of a church, I am convinced that our species should not be called Homo sapiens, for what I just experienced proves that we are NOT “Man the wise”.

So apart from meeting a couple nice people who knew I would be there, the only good thing about this evening for me was the 40 mile ride back home, roaring down the interstate on a mid-summer night, with the hot Texas wind feeling jacuzzi-like in a short-sleeved tee shirt. That at least was nice, even if the rest of the day left me disappointed in humanity. 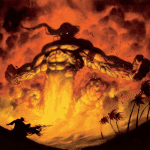 Joe Rogan 'Ivermectin Is The Red...
Laughing in Disbelief
Related posts from RA