A Brief Visit To The End Of The Universe

I’ve gotten up to the next-to-last episode of the last series of Dr. Who – I just have the finale to watch. In the episode “Utopia” the Doctor takes a visit to the year 100 trillion, towards the end of the universe as it approaches heat death. Humans (who still, implausibly, look just like we do today) are still managing to survive.

No, that isn’t an abbreviation for something rude. It is an abbreviation for a question that I was asked recently and which I think it is important to ask, at least as a mental and spiritual exercise, since it can tell us a lot about what we really believe, what is most important to us, and on what basis we believe as we do. What would it take to make you lose your faith?

For me, this question is a different one from “What would it take to make you stop being a Christian?” and many other alternative but important questions one could ask. I am as open as I can be to revising my beliefs in light of new evidence. Those are mere dogmas, metaphors we use to point to the divine, and I am already assuming that they are at best inadequate.

The full version of the question includes a time machine. You can travel back in time, babel fish in your ear so you can understand what is going on, temporal Google on your computer to locate people, places, etc. in time and space. What could you imagine yourself seeing that would radically change your mind about important religious beliefs? What if anything would change your faith altogether?

For me, nothing I might see in the first century would be likely to change my mind radically – unless Jesus turned out to really have walked around talking like he does in John’s Gospel, in which case I might become a fundamentalist. The only exception would be if I found the earliest Christians or Jesus himself doing things that were morally reprehensible. But even that would only affect my committment to the Christian tradition. As far as my faith in God more generally, it would be shaken if I could go to the end of time and see that nothing from our universe survived – I don’t mean me as an individual, I mean nothing whatsoever survived, not even on some other level or plane of existence. That, I think, would challenge my faith at its core, because it would suggest that nothing of what we do matters in the long run, and that even God does not survive.

Since, however, I am skeptical about whether time travel is possible (although it is certainly possible to get to the future by travelling at close to the speed of light), I will not let this scenario trouble me too much for the time being. It is, however, I think, a useful activity to ask this sort of question and see how one would answer it, being as honest about the matter as you can. I welcome anyone reading this to try it and to post their own answers as comments, or e-mail them to me and I’ll share them.

In concluding, let me add that as I thought about this question once more yesterday, watching an episode of Dr. Who related to the end of the universe, I realized that we really don’t have enough information even to engage in a serious speculation. Humanity is like a family that has thus far never gotten further than walking around its hut in some rural village, and only knows its own village (the solar system) indirectly, and has no idea whether there are such things as cities or even life elsewhere, what it might be like, and so on. As we try to answer the ‘big questions’, at the moment it seems inevitable that we will only be capable of giving ‘small answers’, or I should say what will be shown to be small answers in the future, with the benefit of hindsight, when we see more of the ‘big picture’.

July 27, 2007 The Pope Speaks Out On Evolution
Recent Comments
1 Comment | Leave a Comment
"Jesus made it clear that God is always for us and always with us, that ..."
dcsloan Is Your Idea of God an ..."
"(2/2) And a nice bonus of reading the meaning of the cross in this way ..."
John MacDonald Forgive Us Our Debts, Not Repay ..."
"Thanks! As I said I relied heavily on your insights for this piece, which is ..."
John MacDonald Forgive Us Our Debts, Not Repay ..."
"As the old joke has it, "assume makes an ass out of me and you". ..."
Scurra Election, Priesthood, and Creation: A Plain ..."
Browse Our Archives
get the latest updates from
Religion Prof: The Blog of James F. McGrath
and the Patheos
Progressive Christian
Channel
POPULAR AT PATHEOS Progressive Christian
1

Evangelicals, I've Got Some Questions For...
All Set Free
Books by This Author Books by James F. McGrath 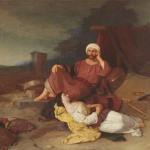