Blame Mark Goodacre if you must (who replied, as I hoped he might, to my previous post about Q). But I find that I must provide details that would spoil most fundamentalists’ Christmas in order to make my defense of ‘Q’. Let me be clear once again that I am not presupposing that Q was a single written document. I do suspect that at least some of the material common to Matthew and Luke but not in Mark came from a written source, in Greek. But I don’t think the case for Matthew and Luke’s independent use of common source material rather than each other depends on our ability to determine in every instance whether it was a written source in a particular language, much less our ability to reconstruct a precise ‘original’ form.

The problem with determining relationships is that, even when there is clear use of a written source, none of these authors is likely to have encountered the majority of the stories and sayings for the first time when they read the written work in question. (That Matthew and Luke seem not to have known how Mark’s Gospel would have continued beyond Mark 16:8 is a remarkable exception to this rule that merits a separate treatment on some other occasion. Remind me to return to it someday). These authors had heard the sayings, been told the stories, and prayed the prayers. The versions they encountered would have diverged through conscious reworking as well as simply through the natural processes of oral transmission. Since the authors would have had this separate fund of knowledge to draw on as well, not every difference will be due to redaction of a source. In some cases, the difference will simply show that the author knew a story so well already in one form that the different written version in front of him could not supplant it.

I digress. My point about the differences between Matthew and Luke providing evidence for Q did not have in mind simply their failure to overlap. It is the cases of genuine incompatibility that are the biggest obstacle to making the case that one drew on the other directly.

And so, Christmas comes early this year – at least as a subject on this blog. The infancy narratives provide significant evidence of the point I was seeking to make.

We may quickly dispense with the genealogies. Their apparent incompatibility has been noticed since the days of the early Church Fathers. The proposed solutions – such as successive levirate marriages – are not more persuasive than the view that these authors did not draw directly on one another.

Let me acknowledge outright that I can imagine some possible changes that one of the authors might have made to the other. For instance, I can understand why Matthew would change Luke’s genealogy to make Jesus more directly the heir to the royal line. I can also understand why Luke would have changed Matthew’s, to avoid the problem of Jeremiah’s pronouncement that no descendant of Jehoiachin’s would sit on the throne (Jeremiah 22:28-30). But neither of these changes explains why they did not keep more of the names the same. The more recent lineage – particularly the name of Joseph’s father, which some who were still alive might have actually remembered – could have been left as it was. Indeed, Luke’s list of names would have provided Matthew with enough additional names to make his last group of 14 actually add up to 14 (which, alas, as it now stands, it does not).

The incompatibilities run deeper – not simply in the date (Matthew places Jesus’ birth before the death of Herod in 4 BCE, Luke connects it with the census under Quirinius in 6 CE), but also in the geographical flow. Matthew’s Gospel places the family in Bethlehem from the outset. They flee to Egypt, and then we are told that they wish to return to the place from whence they had left. They only go to Galilee because they fear Archelaus.

In Luke’s account, they begin in Galilee. They go to Bethlehem simply for the census. After Mary gives birth, they are there for a little over a month, because they head to Jerusalem for the purification rite (Leviticus 12:4). Then as soon as they’ve taken care of that (Luke 2:39) they return to Nazareth. Not only is there no time for a detour to Egypt, but instead of being afraid of the king ruling in Jerusalem, they visit public places there and have impressive things said about their infant.

The two accounts simply cannot be reconciled – in spite of the many large groups of children with towels on their heads who have often seemed to do so. I hope this post doesn’t spoil your enjoyment of your local church’s Christmas pageant. I have nothing against telling the story in its traditional form, as long as one doesn’t think it constitutes a plausible historical reconstruction. I doubt most of the children who enjoy participating in it are worried about that.

But presenting these discrepancies is necessary if we are to be clear on why the common material between Matthew and Luke is best accounted for in other terms than direct use of one by the other. That they fail to follow each other precisely is no surprise. But that they fail to be even compatible with one another when there is no obvious motivation for the divergence, that, in my opinion, provides evidence that they drew on a separate source independently of one another.

I look forward to reading Mark’s reply – which I hope he will entitle “Christmas without Q”. If he does, I will do my best to offer in response a version of “The Twelve Days of Christmas” that lists by numbers points of similarity and difference between Matthew and Luke relevant to this subject. I can hear it already. “On the first day of Christmas my Q-love gave to me…” 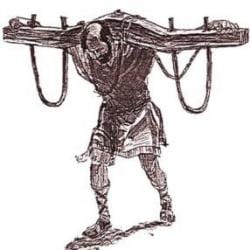