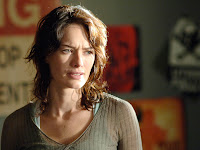 It was only a few days before the most recent episode of Terminator: The Sarah Connor Chronicles that I managed to watch the two-part two-hour premiere. So far, I like the show, which has the eerie menacing sliding sound from the movies when a terminator is around, as well as some philosophical reflections on the part of the main character – who is, interestingly enough, Sarah Connor rather than her son. It is essentially a story focused on Mary rather than Jesus, if one wanted to make an analogy.

At one point Sarah Connor, like Neo in the Matrix, finds herself thinking about the inscription above the Oracle of Delphi, “Know Thyself“. Her version is a pessimistic postmodern one, which continues “for what else is there to know?” This question insightfully tracks how the modern became the postmodern – we are still bound by Descartes’ brute fact of our own existence, but without the same hope for objectivity that the era of the Enlightenment offered. Yet a little reflection shows that a subjectivized “know thyself” does not fare much better, given our tendency towards self deception. Knowing oneself is not easier or more straightforward than knowing a world that exists outside ourselves. Indeed, following this line of thought gives me hope, since it is the very existence of challenges to my view of the world and of myself that point to transcendence – not necessarily transcendence in a natural world beyond me, but at the very least transcendent parts of the self, which are beyond the immediate horizon of my day-to-day experience of selfhood.

I hope the show will further explore the sage advice of the doctor with whom Sarah speaks in the most recent episode. “We can’t predict. We can only try and prevent.” The same future seems to keep coming towards the present in the Terminator series, in spite of the efforts of many to change it. What is viewed as impending doom for humanity is the singularity, when artificial intelligence takes off and is no longer under our control.

The root fear behind the storyline is the fear of all thinking parents. We want to to instill goodness and virtue in our children, and know that if we don’t get the balance right, they will be completely lacking in self control or will harbor resentment and rebel against us. In either scenario, the future gets worse rather than better. Now imagine that our children are borderline omnipotent, and it is clear why the potential of our mechanical offspring terrifies us so. We don’t know how to be good parents, and even when we do, there is no magic formula that guarantees the outcome.

The Sarah Connor Chronicles will hopefully explore this theme further, since it is focused on a parent trying to raise a child to be a hero, a leader, a savior for humanity. If she can figure that out, and we can apply the same wisdom to our raising of the artificial intelligences we create, then there is reason to look to the future with hope and not merely dread.