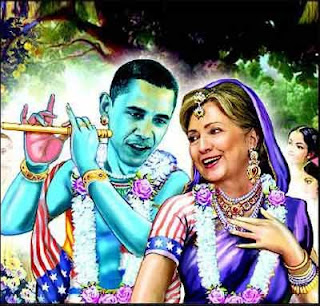 In a recent statement, Barack Obama has acknowledged that he is indeed a devotee of the Hindu god Hanuman. He also acknowledged being a Muslim, and that he also happens to be the antichrist. His statement did not address the accusation that he is, in addition to everything else, a fruitcake.

When asked if these revelations would affect his nomination as the Democratic candidate for the presidency, a spokesperson for the Democratic party (who wished to remain anonymous) said that there shouldn’t be a problem, provided Hillary Clinton does not become Obama’s running mate. “The Evangelical voters are the only ones who are likely to mind that he is an idol-worshipper or the antichrist, and since they’ve already said they would sooner vote for Lucifer than for Hilary Clinton, we can strike a deal that makes it possible for them to do just that”.

Reactions from around the world were varied. While there was jubilation in most quarters in India, Iran is demanding to know whether Obama is Sunni or Shiite. The strongest reaction came from Northern Ireland, where Rev. Ian Paisley (retired from politics but still a spokesperson for the Protestant community) asserted that while he found no cause for concern in Obama’s claim to be the antichrist (since there is no feasible way that Obama could become Pope), he was troubled to learn that Obama carries a Catholic statue around with him. “A Protestant Hindu Muslim who thinks he is the antichrist could be welcomed by Northern Ireland’s Protestants,” Paisley was quoted as saying, “but not a Catholic Hindu Muslim antichrist. That would be too much for our people to take.”

At the end of his statement, Obama explained why he had kept these aspects of his religious convictions a secret. “Religion is very important to a large number of bitter Americans with guns. I didn’t want to take unnecessary risks,” Obama said.