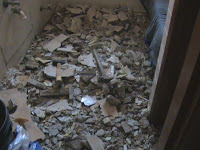 Plenty of people have had flashes of insight while in the bathroom. Others have them because they can’t get into the bathroom. No, this isn’t one of those stories.
We decided to get some tiles put into our bathroom, as well as a new sink and toilet. When the workmen started scraping up the linoleum, however, they were in for a surprise. Underneath, unexpectedly, were tiles. So the job expanded, as these needed to be removed (with tools like chisels and sledgehammers).
Once they were removed, what was beneath the tiles became clearer. Rotten decking. We needed a new floor.
I feel there is a parable in this. How often when you walk across a floor do you think about what is beneath it, what is holding it up, what could at any moment cease to do so? On the one hand, we live our lives in meaningful ways without having answers to all our questions, without being able to trace all our reasoning back to a sure foundation. (For those interested in this topic, I’ll share a recommendation that a friend and colleague in philosophy made to me: read Thomas Nagel’s famous article “The Absurd“). 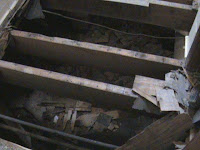 But there is also another message. We should investigate deeper than we do when we have opportunity to do so. Not to do so is reckless and irresponsible, but we often prefer ignorance to the realization that our mighty edifices are built on slim foundations. But it is better to engage in honest investigation and the necessary repair and rebuilding that may prove necessary, than to live in a house built on sand until it collapses around us and on top of us. One option that presented itself early on in our remodelling project was to simply place new tile on top of what was there, rather than digging down beneath the current surface. Had we done so, the added weight of another layer of tile might have had all sorts of undesirable effects. Having the courage to take action now is difficult, but the alternative is to simply risk waiting to see what consequences ensue, and the results of that can be far more painful. That’s the message of the well-known passage in the Tao Te Ching, often quoted out of context:

That which is at rest is easily restrained, that which has not yet appeared is easily prevented. The weak is easily broken, the scanty is easily scattered.

Consider a difficulty before it arises, and administer affairs before they become disorganized. A tree that it takes both arms to encircle grew from a tiny rootlet. A pagoda of nine stories was erected by placing small bricks. A journey of three thousand miles begins with one step (Tao Te Ching 64:1-2, Goddard’s translation).

So I hope you’ll take this opportunity to reflect, and perhaps you will have a flash of insight in your bathroom (or in your faith, or in your worldview), if you have the courage to ask what lies beneath.