What Jesus Said and Did: 2) Divorce

The teaching attributed to Jesus in the Gospels about divorce is not unique. The Dead Sea Scrolls not only make a similar point about marriage, but even root the argument in the same text from Genesis (see Mark 10:1-12). This would be an esy case in which to suppose that perhaps a general, circulating idea was attributed to Jesus, whether intentionally or by error.

One ought to consider, however, the indication that Jesus’ disciples were less than thrilled about this teaching attributed to him, which might provide an argument against it having been invented.

There are, at any rate, reasons to think that this teaching was already attributed to Jesus much earlier than the time in which Mark’s Gospel was written. In Paul’s first letter to the Corinthians, he specifies that his teaching that a wife must not separate from her husband (7:10).

This is all the more intriguing because Mark too specifies Jesus’ teaching indicated that wives should not divorce their husbands. Matthew domesticates this to something more natural in a Jewish context, in which women did not normally have the legal power to initiate divorce.

But what is most interesting is that Paul says that this teaching is not his, but the Lord’s (1 Cor. 7:10). If that was the end of the story, of course, we’d have reason to be suspicious. Who wouldn’t be tempted to add to the authority of what they say by attributing it to a higher authority? Indeed, it is the penchant human beings have to do just that which makes us question the authenticity of teaching attributed to Jesus in the Gospels and elsewhere.

But Paul goes on to specify that something else he has to say is not the Lord’s teaching, but his. Was Paul simply suddenly overwhelmed with guilt at his ploy? Or just suddenly feeling less divinely inspired? The more natural explanation is that Paul is here indicating his awareness that he was here passing on teaching attributed to Jesus that he had had passed on to him. And so we have in this one instance an indication that teaching that later made its way into the Gospels was attributed to Jesus earlier on. Does this prove absolutely its authenticity? Obviously not. But it does show that we do not simply have Gospel authors creating all their material entirely from scratch.

For those who may still be on the fence about the historical authenticity of Jesus’ teaching on divorce, here are some other words of wisdom, the source of which is beyond reasonable doubt, and fictional:

“We’re all at war with ourselves. That’s what it is to be human. The trick is to figure out how to be on the winning side”
– Sylar

November 17, 2008
Quote of the Day (Canonical Prayerbook of the Mandaeans)
Next Post

November 18, 2008 Urgent Business Proposal
Recent Comments
37 Comments | Leave a Comment
"This is why I don't think literalists get to take the "high ground" when it ..."
Phil Ledgerwood Statement of Faith for Biblical Literalists
"Trump is in office to teach people a lesson what they learn from that is ..."
Brianna LaPoint Trump’s Blasphemies
"Listening to your podcast now! Laura and Ian have already been inundated by the mythicists ..."
Chris H Let’s Talk About Jesus
"Of course. But I think supercessionism is worse than baptizing paganism."
robrecht The Aims and Ending of Luke-Acts
Browse Our Archives
get the latest from
Religion Prof: The Blog of James F. McGrath
Sign up for our newsletter
POPULAR AT PATHEOS Progressive Christian
1 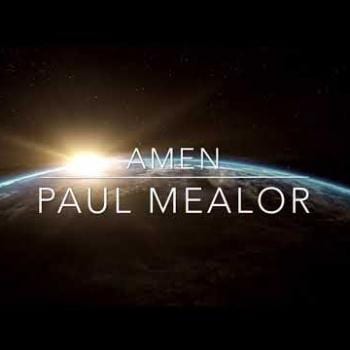