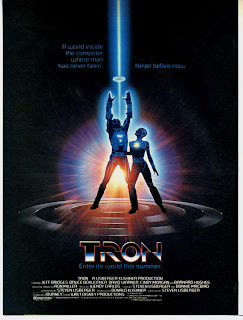 I watched the movie TRON with my son tonight, not having seen it for many years. I was afraid he might find the graphics and special effects pretty lame, having grown up with movies that featured advanced CGI effects, but fortunately that wasn’t the case.

It had dawned on me at some point in my adult years that the movie echoed a lot of religious themes, in particular with a person from the world of the creators becoming a program and entering the computer world, showing himself capable of miracles, then sacrificing himself to defeat the evil ruler of the present evil age, ascending as a result to the transcendent world from which he came.
What I didn’t remember was how explicit the religious element was in the movie itself. The forces of the Master Control Program expected other programs to deny belief in users (i.e. programmers), and if they did not, they were referred to as “religious fanatics”.
I wonder what the sequel, the unpronounceable TR2N, will be like as far as this component is concerned.