TRON: The Gods Have Become Like One Of Us 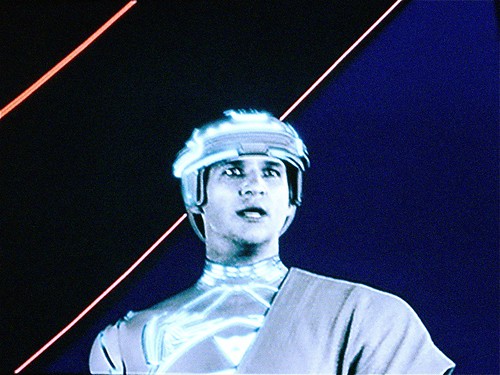 As I’ve been reflecting on the far more explicit religious overtones in TRON than I recalled from watching the movie when I was younger, I’ve found one particular aspect of its implicit message intriguing.

At one point, Tron says to Flynn that, if he is a user, then he must be in the computer world as part of some plan. Flynn’s response is that sometimes you just muddle through and take things as they come. Tron thought that is the way things are for programs, but was shocked that the same might be true for users.

Given the way, particularly at the very end of the movie, the parallels between our “real world” and the computer world are highlighted, it seems that the movie TRON would have us ask not merely “is this a simulation” (as in the Matrix films and The Thirteenth Floor

) but “What if God was one of us – just a slob like one of us…?” It is a principle since the Copernican revolution that the heavenly realm is not made of different sorts of substances with different properties than the terrestrial. Is TRON suggesting a similar sort of theological revolution – that wherever and whatever “heaven” might be, it is unlikely to be populated by beings that do not face the same problems and hurdles we do? To put it another way, instead of turtles, what if it is “people” or “programs” all the way down? Of course, an infinite regression of anything is unsatisfying, but that’s precisely the philosophical conundrum that plagues religious believers and atheists alike: we don’t have any clear-cut reason to stop the regression at some specific point rather than another, whether at a deity or at a multiverse-making mechanism.

With multiple programmers/users, TRON may be argued to have a “radical polytheistic” outlook. Who started the company, who made it great, and who is currently in charge are not the same: there is no stability of leadership in the human realm. The figure of the Master Control Program is perhaps a rebellious Satan figure, wishing to be “the only god”. The MCP is persuaded that users are imperfect and that it can rule over all worlds. Rather than monotheism, the MCP has a vision of monolithic dominance, seeking to absorb all other programs into its own self, not realizing how diminished the computer world has become, or how grotesque the MCP itself has become, in the process. And so above all else, the character of the MCP serves as a warning. The attempt to become all-powerful and all-encompassing will not lead one to greatness in any meaningful sense.

One reason I continue to value the doctrine of the Trinity (not as though it could be treated as a statement of fact about the divine essence, but as a metaphor) is because of the power of its present-day formulations to model unity in diversity. If, whether philosophically or scientifically speaking, we cannot answer the question of what the ultimate reason is that anything exists, nor identify a First Cause with attributes that we can know, then the best we can hope to do is choose a symbolic expression of the ultimate. And what better one than an image of mutual cooperation between persons? The doctrine of the Trinity is a potent religious symbol because it has the potential to get us to ask: What if it’s not turtles but love all the way down?

In a sense, that message is there in TRON too. Walter Gibbs’ love for the company he created in his garage leads him to talk about the spirit that he and others have left in the programs they created, to which Dillinger replies that it is getting late and he has better things to do than to have a “religious discussion” with him. And it is a plurality of cooperating persons that wins the victory, not the monolithic clinging to power of one individual, whether human or program.

March 18, 2009 Jesus, The Final Days: Dishonorable Burial
Recent Comments
2 Comments | Leave a Comment
"Under the old covenant (ten commandments), people were (and still are) racists and sexists. For ..."
Herrnhut Was Jesus a Racist?
"Reconciliation is a two-way street, restoring a broken relationship between two people. God does indeed ..."
Iain Lovejoy Forgive Us Our Debts, Not Repay ..."
"Excellent. God is not, and does not want to be, an accountant; keeping a ledger ..."
Harvey James Johnson Forgive Us Our Debts, Not Repay ..."
"Don't confuse forgiveness with reconciliation. Jesus tells us to forgive people who sin against us, ..."
Derek Thompson Forgive Us Our Debts, Not Repay ..."
Browse Our Archives
get the latest updates from
Religion Prof: The Blog of James F. McGrath
and the Patheos
Progressive Christian
Channel
POPULAR AT PATHEOS Progressive Christian
1