The discussion of mythicism that has been taking place mostly here and at Vridar has now spread to at least two discussion boards: Think Atheist and the Freethought and Rationalism Discussion Board.

I think I have enough to deal with in terms of the discussion here, but if any readers are members of either site, you may want to join in the discussions there.

All I’ll say for now is that I encourage the atheists and freethinkers at these forums to live up to their principles and reputations. You rightly stand against pseudoscience in favor of mainstream science. Don’t be easily duped into discarding mainstream scholarship in history because a few fringe folks have made a plausible sounding case that appeals to what you’d like to be true. You know better than that. Inform yourselves about rigorous mainstream scholarship in history just as you’d want creationists to do with the natural sciences. It’s the right thing to do, and you know it. By all means, make up your own minds. But don’t just listen to fringe views expressed on the internet and in self-published books. You know where that road leads, and have surely criticized others for following that path. I don’t ask for any sort of special hearing for any particular viewpoint. I just ask you to be true to your principles!

February 8, 2010
A Conservative Religious Viewpoint On Abstinence
Next Post 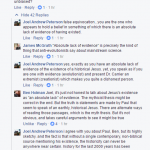 February 9, 2010 Mythicism: Microexistence vs. Macroexistence?
Recent Comments
15 Comments | Leave a Comment
"I did wonder about the possible consequences of the sudden introduction of massive rainfall on ..."
Sue Burnam Entering Strange New Worlds of Star ..."
"Alas, over here in the UK we haven't been able to see Strange New Worlds ..."
Scurra Entering Strange New Worlds of Star ..."
"Yeah - I think the important distinction is that places that are using "fakes" to ..."
Scurra Prehistoric Planet
"Thanks so much! While I'm not sure how many of the additional things that I ..."
James F. McGrath The Parables of LaGuardia Airport, the ..."
Browse Our Archives
Related posts from Religion Prof: The Blog of James F. McGrath