The End of LOST: Further Reflections and Unanswered Questions

The End of LOST: Further Reflections and Unanswered Questions May 27, 2010 James F. McGrath

Having said that there are ways in which the finale was satisfying, there are certainly many loose ends. But perhaps, as with comparable shows like the X-Files, we are supposed to continue exploring them rather than expect the series to resolve everything for us. And so I’d like to invite fans of the show to mention mysteries, loose ends, and apparent contradictions that they wish had been sorted out – and others who think they’ve cracked those particular puzzles to share what they think the solutions are.

For me, my main question is who was in the cabin when Ben first took Locke there. Was it Jacob, and if so why did he appear in the way that he did? Was it the smoke monster, the circle of ash already having been broken? Was it someone else? This isn’t a huge issue, but I am curious what answer the writers would give to the question, if any.

Nikki Stafford links to the video below about unanswered questions on LOST. Below it you’ll find a bunch of other recent LOST posts from other blogs. 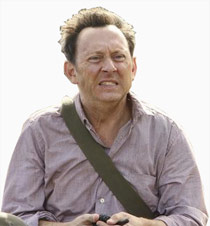 Nik at Nite not only reflected on Jack’s daddy issues, but also linked to posts by her readers (including me!).

IO9 has a comic strip with scenes from the life of Hurley and Ben on the island. Christian Piatt has a video with thoughts on the ending of Lost.

DocArtz has several recent posts including Communion with one another and the purpose of Lost, Damon Lindelof talking about the finale, and Michael Emerson giving some indication of what the extra minutes of story on the DVD will cover. But at the time of posting this, the site seems to be malfunctioning.

Patrol magazine recommends Chuck to those trying to cope with life after Lost.

And here’s an interview Michael Emerson gave regarding the finale and how things ended with Ben: