I have been delighted to see discussion of online and electronic textbooks spreading through the biblioblogosphere. It seems to have begun with a Tweet from Brooke Lester, and then spread in particular to NT Blog and AKMA. I have been spending a lot of time lately looking into the educational use not only of the usual software and media but also some that are less frequently mentioned in such contexts, as well as some that do not seem to exist yet.

It is important to note that several different ideas have been mentioned, and a few more should be included in the ongoing discussion.

An electronic textbook is a textbook that can be read and utilized using some sort of electronic device. Often discussions of such books have been limited to making the text of the printed textbook available electronically. So I’ve been delighted to see the discussion move in less conventional directions.

An open access textbook is simply one that can be accessed without payment being required.

But as Mark Goodacre has pointed out, traditional textbooks are too “texty.” We should be able to do more than simply offer text just delivered by different means. 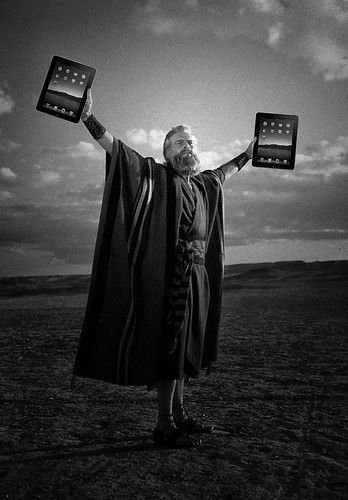 What I’d like to see added to the discussion, even though it is already exciting as it is, is discussion of things that can potentially be done via electronic media which could not be done with traditional textbooks. For instance, a while back I tried to develop a “choose your own adventure textbook” that asked students questions and presented information to them in a way that was tailored to their own interests, assumptions, and prior knowledge based on the answers they gave. We should also be able to embed audio and video, as Mark suggested, and thus for instance allow one to move seamlessly not only from a discussion of The Acts of John to a podcast or video of a lecture the professor gave on that topic, but also to a recording of Holst’s The Hymn of Jesus as well as the primary text and other relevant secondary reading. Even more than that, we should also be able to add pop-up annotations and guidance for readers, and have discussion forums for the text linked directly to the text itself so that it is just a click away.

Much of this will depend on the development not merely of content but of textbook platforms that allow the aforementioned characteristics and features to be integrated into the textbook.

So let’s keep this discussion going, but let’s also make sure that it is freed to as full an extent as possible from the archaic constraints of “textiness” in all its forms!

July 29, 2010 Review of The Hebrew Gospel and the Development of the Synoptic Tradition
Recent Comments
4 Comments | Leave a Comment
Browse Our Archives
Related posts from Religion Prof: The Blog of James F. McGrath