“Thank God My Opponents Are Pharisees!” 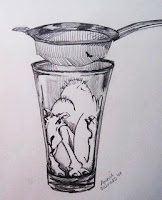 I remember in my teenage years how I expressed my Christian faith with great zeal, little knowledge and even less wisdom. After all, Jesus didn’t pull any punches with the Pharisees, and Paul was outspoken and direct in his attacks on his opponents.

Looking back now, I see this as yet another application of the Evangelical rule of interpreting Scripture by Scripture. Hard sayings that call us to bless those who persecute us and to love our enemies can be circumvented and essentially undermined by appeal to this principle, since the Scriptures must agree. And so whatever those hard sayings may mean, clearly they do not interfere with my condemning that person without mercy.

But now it seems even more obvious to me that we could reverse the process, and start with these challenging principles, and then ask ourselves whether we can make sense of the words and actions of Jesus, Paul and others in light of them.

In those earlier sparring matches, I never asked myself how long Jesus tried other ways of interacting with the Pharisees, before engaging in blanket condemnation and pronouncement of woes. Nor did I ask whether cultural assumptions about appropriate debating rhetoric may need to be considered in applying certain New Testament texts to our time. But here’s the most fundamental question of all, in my opinion as it is today: Why do we so frequently assume that those who disagree with us are like the Pharisees, rather than like the Gentile centurion or Canaanite woman? I think we can be certain that Jesus would have disagreed with the latter about a great many matters of religious doctrine, presumably even matters as fundamental as idolatry. And yet he pronounced their faith great, greater indeed than that of contemporaries with whom he would have shared a far greater number of religious opinions. And this suggests that Jesus’ condemnation of others may not have been about what they believed, but how they applied it, and perhaps most of all, how religion was being used as a basis for self-righteous justification and for marginalization of others.

Contemporary Christianity in its online manifestation may be providing stimulus (to a certain degree) for intellectual development among those who take the time to engage in debates and discussions. But the tone of the interaction suggests that spiritual and moral development are perhaps being neglected in the process.

Electronic means of communication have the potential to unite Christians around the world as never before. And yet a lack of maturity and respect on the part of many of some of the most vocal representatives of Christianity online even more frequently splinters and alienates.

We all have the instinct to assume that our critics and those who view things differently from us must be like the New Testament Pharisees, the lukewarm, and whoever else might justify our laying into them without mercy. The challenge is to ask ourselves whether they might not rather be like the various “pagans” whom Jesus pronounced to be not far from the Kingdom of God.

[This post is part of the Big Tent Christianity synchroblog]

August 10, 2010 Review of The Gospel of John in Cultural and Rhetorical Perspective
Recent Comments
6 Comments | Leave a Comment
"I did wonder about the possible consequences of the sudden introduction of massive rainfall on ..."
Sue Burnam Entering Strange New Worlds of Star ..."
"Alas, over here in the UK we haven't been able to see Strange New Worlds ..."
Scurra Entering Strange New Worlds of Star ..."
"Yeah - I think the important distinction is that places that are using "fakes" to ..."
Scurra Prehistoric Planet
"Thanks so much! While I'm not sure how many of the additional things that I ..."
James F. McGrath The Parables of LaGuardia Airport, the ..."
Browse Our Archives
Related posts from Religion Prof: The Blog of James F. McGrath