Christmas: The Christian “War on Solstice” 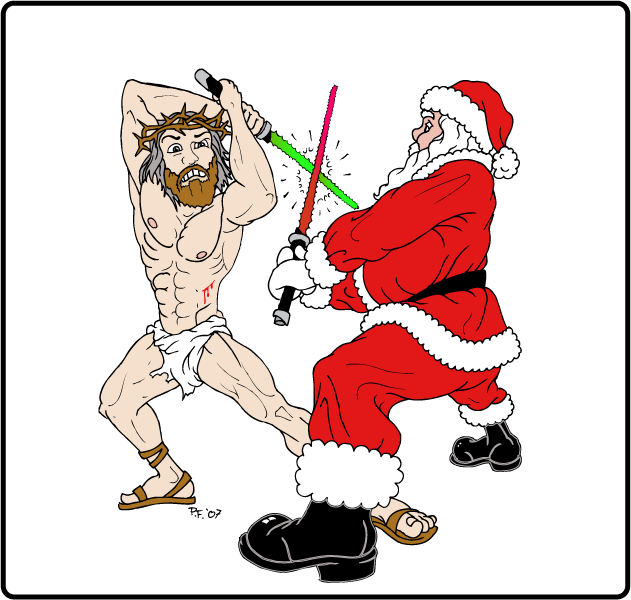 Today in my Sunday school class I decided to turn our attention to seasonal matters. Soon, the topic of being wished “Happy Holidays” as opposed to “Merry Christmas” came up. And so I took that opportunity to talk about what I consider one of the great Christmas miracles: the fact that long ago Christians managed to “hijack” the already-existing solstice festival, and turn it into a Christian celebration so thoroughly and so effectively that, more than a millennium and a half later, cultural Christians can complain about the “hijacking” or “secularization” of Christmas without any sense of irony.

The New Testament doesn’t provide a date for Jesus’ birth (although some have surmised that, if one takes the reference to shepherds watching their flocks by night as historical, it would probably have been during the lambing season and thus in the Spring). It also says nothing about celebrating it annually, or indeed at all. The celebration of Christmas on December 25th is a result of taking an already-existing festive occasion – the winter solstice – and transforming it into a Christian holiday.

And so I find the complaining of cultural Christians in the United States about their beleaguered or persecuted status at Christmas time not only ironic, but tedious and even offensive. The earliest Christians lived in a world where the issue was not the failure of salespeople to wish them a merry Christmas, but rather their own failure to participate in dominant cultural and religious rituals. The issue for the earliest Christians was not whether one could display a nativity scene on government property, but that every city where Christianity spread featured prominent displays of deities whom the Christians would refuse to worship, sometimes at the cost of their lives. That was persecution, not the fact that someone wishes you “Happy Holidays” – especially when that person would probably not be considered a true Christian anyway by born-again believers.

Since when are committed Christians committed to encouraging those without a deep personal faith to maintain an outward veneer of Christianity and to self-identify as Christians? In fact, born again Christians will happily, on other occasions, explain to those individuals whom they criticize at Christmas for not offering them Christian greetings that they aren’t, from their perspective, actually Christians. But once again the irony of their demanding that such people wish them a “Merry Christmas” rather than “Happy Holidays” seems to go unnoticed.

So to those who are Christians I recommend ceasing the ridiculous habit of complaining about what others do or do not wish you, and appreciating instead that, for all our multi-cultural context today, Christmas still has Christian associations that will provide you with an opportunity to talk about your faith and what this holiday means to you. Very few people will take offense at you if you wish them a Merry Christmas. And if they do, that is their prerogative, just as it is yours to express your own faith as you see fit.

But the truth is that the Christmas holiday features services that focus on Christian doctrine and stories, but what the holiday means in practice for American Christians is otherwise the same thing it means for everyone else – time off work, time spent with family, and giving of gifts. While many American Christians complain about what the store employees wish them, they are there in the stores alongside everyone else, engaging in a practice that has no real Biblical roots, making purchases in the spirit of our contemporary materialistic age.

So to those in the English-speaking world who consider themselves Christians, my recommendation is this: stop complaining about the “de-Christianization” of a holiday that we ourselves stole (sorry, borrowed) from others and successfully hijacked for more than a thousand years. And instead delight in the fact that, even in our changed and changing context,  you can express your Christian faith, and have at least as much of an opportunity to take already-existing holidays and customs and fill them with distinctively Christian values – for yourself and as an opportunity to share your faith with others – as Christians in bygone eras did. If you feel you are not up to that challenge, then perhaps instead of complaining about the greetings of others, you would do well to ask whether you faith lacks the depth, vibrancy and creativity that Christianity has demonstrated at other times in history.

December 11, 2010
Caroling With Yoda, Frustrating It Was
Next Post

December 13, 2010 Dismantling Fundamentalism Intro
Recent Comments
20 Comments | Leave a Comment
"Under the old covenant (ten commandments), people were (and still are) racists and sexists. For ..."
Herrnhut Was Jesus a Racist?
"Reconciliation is a two-way street, restoring a broken relationship between two people. God does indeed ..."
Iain Lovejoy Forgive Us Our Debts, Not Repay ..."
"Excellent. God is not, and does not want to be, an accountant; keeping a ledger ..."
Harvey James Johnson Forgive Us Our Debts, Not Repay ..."
"Don't confuse forgiveness with reconciliation. Jesus tells us to forgive people who sin against us, ..."
Derek Thompson Forgive Us Our Debts, Not Repay ..."
Browse Our Archives
get the latest updates from
Religion Prof: The Blog of James F. McGrath
and the Patheos
Progressive Christian
Channel
POPULAR AT PATHEOS Progressive Christian
1