Ben Witherington reminded us of a recent post on Larry Hurtado’s blog about ancient monotheistic worship. It usefully points out that the defining factor of Jewish piety was not always expressed by means of a creedal statement, but often simply took the form of a refusal to worship any other than God. 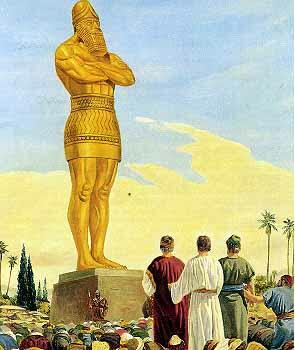 Note how often it is the case that specifically sacrificial worship was the make-or-break issue. In the case of other forms of “worship,” such as the prostration before another that is the most basic meaning of the Greek word προσκύνησις, it seems to have depended who the object was and/or what the connotation of the prostration was, or perhaps better, it mattered what the figure in question’s relation was to the one God. While in Daniel 3 the Jewish men refused to bow before the statue, and it seems not to have mattered to the author enough to even tell us exactly who or what the image was of, in Daniel 2:46, Daniel is the object of Nebuchadnezzar’s worship/prostration, and Daniel is not depicted as rejecting it or commenting negatively on the action.

My interpretation of this is that many Jews, perhaps most, would have considered it inappropriate to offer any of the range of kinds of “worship” – whether prayer, prostration, or sacrifice – to a god, king, or other figure felt to have set himself or herself up as a rival to the one God. But before a figure who was recognized as an agent of the one God, some acts of reverence/worship would have been considered appropriate by at least many Jews – although sacrificial worship still would not have been.

Another text that illustrates this is 1 Chronicles 29:20, where the people are said to bow before Yahweh and the king (one verb, two objects), but in the next verse it says that the following day they offered sacrifices to Yahweh alone.