Doctor Who: Let’s Kill Hitler (and answer the oldest question in the universe)

Doctor Who returned today with the long-awaited episode “Let’s Kill Hitler.” The show is not only avoiding doing obvious things with such a title, but is also delivering answers to questions it had previously raised, while raising new ones – in other words, it is full speed ahead doing all the things that fans love about Doctor Who. Spoilers await in the remainder of this post, and so if you have not yet seen the episode, and want to watch it spoiler free, then please bookmark this page and come back later.

First, let me start with the features that relate to the intersection of religion and science fiction. One obvious one is the revelation (which had already been leaked in some interviews, but only appeared in the show tonight) that the Silence are not a species, but a religious order. Given that we previously encountered the headless monks as an order apparently dedicated to their hunt for the Doctor, this might not be that surprising. But it suggests that religion is going to feature prominently in coming episodes.

We know that one of those episodes will be called “The God Complex” and in fact the concept of a God complex appeared in today’s episode. The main new characters are a group of time travelers who find war criminals, extract them just before the end of their life, and “give them hell.” As the Doctor puts it, who they think they are is obvious. But this notion of ensuring “justice” by inflicting pain on the wicked rather than by eliminating wickedness provides a great starting point for discussion of the topic whether posthumous punishment of the sort that Judaism and Christianity developed actually achieves justice. The Doctor’s approach works towards the redemption rather than punishment of Melody Pond, offering a different approach which, if not the one that many Christians embrace, is also in keeping with certain core Christian emphases. We also learn some rules of time travel and being connected with the Doctor in the episode, and rule #1 is arguably the most interesting and discussion-worthy.

One more thing: if you read this far but are trying to avoid major spoilers before watching, then DON’T under any circumstances go to the River Song page on the BBC web site. Even just the picture there gives a lot away.

If you saw the episode, what did you think of it? Which of the components related to the intersection of religion and science did you find most interesting, and which are you most hoping will be explored further in future episodes?

August 28, 2011 What is the Oldest Question in the Universe?
Recent Comments
31 Comments | Leave a Comment
Browse Our Archives
Follow Us! 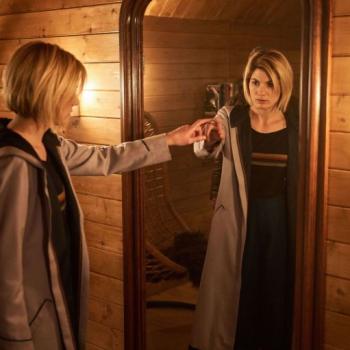